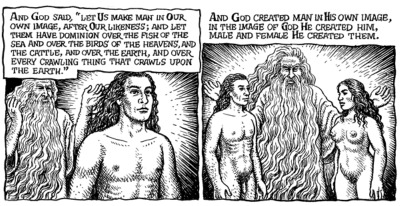 R. Crumb’s faithful rendering of Genesis highlights the book’s inconsistencies, including the conflicting accounts of the creation of humanity.

Was Eve formed as a subservient “helper,” from Adam’s rib, or did the Lord make man and woman at the same time, with a let-there-be-light-type command? The simultaneous creation story is the older one, actually, but fundamentalists read them together, giving greater credence to the flesh-of-my-flesh, bone-of-my-bone version, and seeing (or at least acknowledging) no conflict.

Paul Morris rightly praises Crumb’s “portraits of the early forefathers and foremothers, as well as painstakingly detailed terrain, vegetation, and attire — an attentiveness that would border on overresearched if it weren’t so immersive.” Although I can’t judge as a historian or archaeologist would, Crumb’s Book of Genesis, like Eric Shanower’s Age of Bronze series, feels textured and informed, and anchored in a particular time and place.

I’d love to see his straight-faced take on Exodus, not to mention Leviticus, Numbers, and Deuteronomy.

But despite Crumb’s vastly superior artistry (above, and first panel below), as I read I kept thinking of the frightening, ill-reasoned, and weirdly campy tracts of one Jack Chick (second panel below), the most influential cartoonist of my young life.

Probably it’s all the Sodom and Gomorrah. And the brimstone and hellfire. 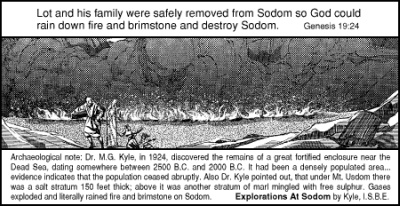 In the spirit of The Awl’s Public Apology column: Sorry again, ’80s Miami, for pressing This Was Your Life! on you in Tropical Park when you were just trying to have a picnic.

See, previously The face of Jack Chick, the Cthulhu witnesses, and a very Jack Chick Halloween.