When is a book not a book? 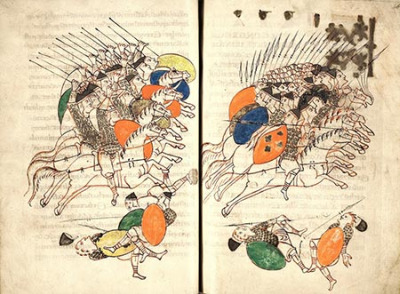 Even as the printing press was taking hold, the Abbot of Sponheim urged his monks to keep copying texts by hand. The written word on parchment, he said, would last a thousand years, whereas words printed on paper were cheap and fleeting.

His argument has echoes in the ebooks debate. But somehow rigorous prose withstood the demise of parchment — and of the scroll and the cuneiform tablet before it. I’m pretty sure it will also survive the Kindle, the iPhone, and whatever else emerges.

Ebooks have really taken off recently, but as a culture we’ve actually been using electronic books for awhile now, even if we haven’t always thought of them that way. On the Internet we’re constantly encountering texts — dictionaries, encyclopedias, public domain works of all stripes — that were once bound and shelved. The change has happened so gradually, and so naturally, that it sometimes seems as though we’ve suffered a collective case of amnesia: the moment a text moves online, we forget that we used to perceive it as a book.

If I start reading a history of the printing press on Google Books and then check the volume out from the NYPL, am I doing something fundamentally different because I can turn the pages in my hand? Some people I respect would say yes, but I don’t see it.

Maybe I think in this fluid way because my day job is in legal publishing, where everything, from the shortest local law to the most massive scholarly treatise, is available (for a fee) online, and has been for more than a decade. Not that the shift was painless. When I started law school in the mid-’90s, some professors saw research databases like Westlaw and Lexis Nexis as a fad. The sites were said to foster laziness and sloppy thinking, to fly in the face of tradition and threaten jurisprudence itself. Proper apprehension of the law, it seemed, involved cross-referencing dusty tomes and using our highlighters. But by the time I graduated — and certainly while I was practicing — the vast majority of legal research was happening on the Internet.

Nowadays most medical practitioners and scientists rely on the same kinds of databases. Academic journals are migrating online at an astonishing rate. Google Books, JSTOR, and online card catalogs (like the NYPL’s) help researchers pinpoint sources for all manner of specialized subjects. Classics are available, through Project Gutenberg and other sites, for free in myriad formats. Print periodicals like Harper’s, The New Yorker, and Granta are making their archives available to subscribers online. Even dictionaries have gone electronic — and it’s become a cliche to say so, but I literally can’t remember the last time I consulted a print encyclopedia.

Last June, William Gibson predicted that everyone eventually will own a single volume. It will look like the ones on your shelf, he said, but will be “whatever book you desire, when you open it.”

I guess it’s not terribly surprising that the author who prophesied the coming of cyberspace (and is a Borges fan) would conceive of an infinite library collapsed into a single device — particularly when techies have been decrying “treeware” and awaiting an e-reader revolution for years now. But what has become clear since Gibson’s pronouncement is that ebooks are going mainstream in multiple formats, and will continue, at least for the moment, to coexist with print.

At home I still turn mostly to hard copy for reading novels, but increasingly I rely on my iPhone while commuting. Not only does it hold your page if you drop it on the subway tracks, but the device quickly becomes invisible, which is the best compliment I can pay it.

As Toni Morrison observed in her endorsement of the Kindle, reading novels means entering another world. When I’m fully immersed, I don’t focus on the pages, or how I move between them, but on the story itself.

While the increasing migration of the books into electronic formats is a foregone conclusion, we don’t know yet exactly how the shift will affect literature.

Will literary magazines continue to spring up online? Will control of publishing, as William Gibson implies, shift dramatically? As the reading experience changes, what will happen to stories themselves? Could hyperlinks and interactive maps and theme songs and video games undermine or even destroy the fictional narrative as we know it? And, given the way technology is always changing, how do we ensure preservation of past and present writings for future generations?

Lots of free-association here, I know. Maybe too much. Next Sunday afternoon I’m moderating a panel on Literature and the Digital Age at the Brooklyn Book Festival, and I figured I should set down some of my own thoughts before coming up with questions for the panelists: John Freeman, Dwight Garner, and Sarah Schmelling.

See also How writer and ebook pioneer Josh Koppell’s own publishing disaster spawned the Iceberg reader; Budd Parr, Carolyn Kellogg, and me on the literary iPhone; how to build a literary app for the iPhone; Mike Cane’s The eBook Test; and PDAs of the ancient Sumerians.

The Battle Scene image, above, is taken from the medieval illuminated manuscript Book of Maccabees 1, and appeared in the Met’s recent Pen and Parchment: Drawing in the Middle Ages show.