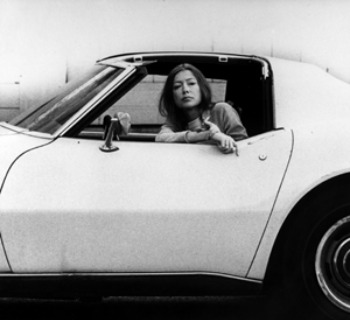 Fiction and the rest of life edition:

“I wrote stories from the time I was a little girl, but I didn’t want to be a writer. I wanted to be an actress. I didn’t realize then that it’s the same impulse. It’s make-believe. It’s performance. The only difference being that a writer can do it all alone. I was struck a few years ago when a friend of ours — an actress — was having dinner here with us and a couple of other writers. It suddenly occurred to me that she was the only person in the room who couldn’t plan what she was going to do. She had to wait for someone to ask her, which is a strange way to live.” — Joan Didion (pictured), The Paris Review, 1978

“The basic theme on which I’ve tried to play all my variations is the problem of the artist, the contrast between the excitement of beauty and the demands of life; between, if you will, the ab- or super-normal poetic vision and the normal necessity of catching the eight o’clock bus. My theme is also the paradox that the vision could never live without the opposing necessity since it must be inspired by it.” — Thomas Mann, New York Times, 1955

“The photographic darkroom emerged as a perfect metaphor for my life. It was the one place I could lock myself in (rather than being locked in) and legally not admit anyone else. For me it became a kind of temple. There is an episode in Steps in which a young philosophy student at the State university selects the lavatories as the only temples of privacy available to him. Well, think how much more of such a temple a darkroom is in a police state. Inside, I would develop my own private images; instead of writing fiction I imagined myself as a fictional character.” — Jerzy Kosinski, The Paris Review, 1972

“I realized not understanding something is perhaps the best reason a novelist can have to write about it; I realized my favourite novels were, with rare exceptions, novels of enquiry, of investigation. From Conrad’s Under Western Eyes to Sebald’s The Emigrants, certain works of fiction give us the sense that in writing them authors are entering an undiscovered country. They seem to know their story no better than their narrators; we read them and feel that writing, for them, is finding out.” — Juan Gabriel Vásquez, PEN America Center, 2008