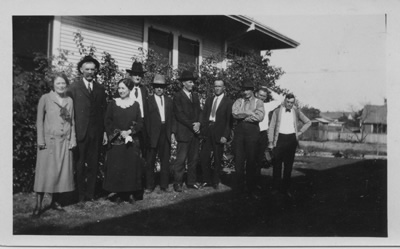 A few months ago, I re-posted some of my Texan grandmother’s expressions. Since then, my sister and I have thought of a few more that circulated in our family. Two or three are Granny’s, but more are our mom’s:

You sound like a dying cow in a hailstorm. Said to a whining child — i.e.,, when I was a kid, me — or, in the third person, about someone who can’t sing well. One of my mother’s favorites.

Looks like they had a real rip-snorter. Means a large, fun event or occurrence, but sometimes used sarcastically. My mother might say it, for instance, about the funereal group photo of the Johnstons, my grandmother’s paternal line, above.

He blinked at me like a frog on a lily pad. Said when someone is acting smug or cagey. Also Mom’s.

She couldn’t find her butt with both hands. Another Mom classic. Pretty self-explanatory.

Don’t that just take the rag off the bush? I.e., isn’t it appalling? (I never understood the derivation of this one, but found an explanation online: laundry was sometimes dried on hedges, and occasionally people stole the rags.) My grandmother’s saying, not Mom’s.

We had a real toad strangler. A bad rainstorm.

He’s all hat and no cattle. A show-off or big talker, with nothing to back up the bragging.

Don’t just sit there looking like a tree full of owls. I.e., don’t look so surprised or stricken. Said to a group.
More from readers’ email and comments left beneath my Facebook thread on the subject:

Greg Wicker reminded me of “Shit fire and save matches!” In my family, used as an expression of surprise and often abbreviated as “Shit fire!” (“Fire,” incidentally, is pronounced “fahr.”)

Michael Schaub, who recently moved from Austin to Portland, sent in a couple that are new to me but quintessentially Texan in formulation and tone: “My grandfather, from San Antonio, used to say about someone he didn’t like: ‘If I ordered a whole trainload of sons of bitches, and they only sent him, I’d accept the shipment.'” And another from his grandpa, “about people who kept doing things incorrectly despite being taught otherwise: ‘You buy ’em books and you buy ’em books, and they just chew on the covers.'”

M.E. Parker reminds me of some I’ve definitely heard from the mouths of Dallasites: “I swear, that boy could talk a dog off a meat wagon.” “Hell, she couldn’t pour piss out of a boot with instructions on the heel.”

Lyrissa Lidsky, also a Texan, says, “My father always talks about people who are educated beyond their intelligence, which is pretty much self-explanatory but very useful in my line of work.” She also gives a shout out to the ever-popular “That dog won’t hunt,” popularized by LBJ.

Jack Pendarvis’ Alabaman granddad used to say, “‘He was grinning like a mule eating briars.’ It doesn’t refer, as you might think, to a fake or forced grin as of someone in pain (briars are sharp). It just means a big, toothy grin. When a mule eats briars, it rolls back its lips so they don’t get jabbed. My grandfather used it to mean a giant, open smile.”

Reagan Arthur’s grandfather, who lived to 101 and was from Maplewood, NJ, but spent much of his adult life in Bethesda, “had a wooden board on which he’d carved the following: ‘Just enough fleas is good for a dog to keep him from thinking on being a dog.'”

Brent Cox says “my family’s (from WV) really memorable ones dealt with obscuring the TV — ‘you been drinking dirty water/cain’t see through ya’ and ‘you make a better door’n ya do a windah.'”

Dan Leo offers this one “from Philadelphia, PA, where they boo Santa Claus”: “Of an extremely ancient senior citizen: ‘Some guys you gotta beat into the grave with a stick.'” And “another one from the city of brudderly love: ‘He’s so lazy he shits in bed and kicks it out with his feet.'”

Lisa Peet writes: “Variant on #3 — my long-ago boyfriend’s grandmother used to say ‘Shit in one hand and wish in the other, and see which one fills up fastest.’ I kind of like that one better — rather than saying your wishes are shit, which is debatable, it’s more about shit being a whole lot realer than wishes, which is inarguable. I still use that phrase all the time, much to everyone’s dismay.”

From Marco Romano: “If I put his brain in a gnat’s ass, it would fly backwards.”

Chris Bryson’s Illinois grandmother used to say, “He’s running around like a man with a paper asshole,” but he’s not entirely sure what it means.

Anne Fernald’s favorite Iowan-ism: “He walks like he’s got a cob.” (“Of corn,” she explains. “Where you’d guess.”) And another from one of Anne’s uncles, apropos of a classmate, “It’d be like making love to a knothole.”

Peruvian Ana Lucia Nieto writes: “We say ‘He/she thinks he/she’s the last slurp of the mango,’ meaning someone believes him or herself to be super cool.”

One of Kate Guttman’s Maine-isms: “Hard tellin’ not knowin.’ This is pretty self-explanatory. It means you’ve got no earthly clue but don’t want to say.”

Sommer Hixson offers a couple pithy and concise classics that were some of her (Northeast via Midwest) mom’s favorites: “Shit or get off the pot.” (Gran loved this one) “It’s happy hour somewhere in the world (with Rob Roy in hand, straight up with a twist).”

Alicia Gifford says, “A one-time BF told me he was ‘hornier than a two-headed goat.'”

From Cathy Gleason: “A good drink ‘goes down like sweet jesus in satin panties.'”

Grant Cogswell recalls a great-uncle from Topeka who “worked on the line at Freuhauf Trailer in L.A., and frequently mispronounced words he’d absorbed into his vocabulary from his voracious reading. He’d always say, ‘I ain’t but seen it wrote.'”

Amy Griggs brings us the classic, “They were so poor, they didn’t have a pot to pee in,” from her Alabama Memaw. My mom’s family said “piss”; a Chicagoan I know says “wet.”

One from Tim Brown’s veteran father: “He was shaking like a dog shitting carpet tacks.’ — He was trembling severely from fear or cold.”

Okie Kim Cox writes in with some old standards: “He’s up the creek without a paddle” (he’s screwed); “Ain’t worth a hill of beans” (said to mean “something is of no account”); “she’s in tall cotton” (“in her element”). Also: “Whenever I used to get between my dad and the TV, he’d always say, ‘Your Daddy’s not a glassmaker.'” And Gregory Luce knows the cotton expression I’m familiar with: “shittin’ in tall cotton” (i.e., got it made).

Poet Susan Ramsey opens up her grandmother’s treasure chest, and send these: “‘Not all old maids are women.’ Spoken primarily of (so help me) Homer Clisby, married to Aunt Hetty, who ‘would stop to iron his shoe laces on the way to a fire.’ ‘No laughing matter, but no matter if you laugh.’ ‘Plain as a mud fence.’ ‘Melted and poured,’ to ‘describe someone in too-tight clothes.’ ‘Better to burp and be in shame than not to burp and be in pain’ (said of a polite woman with gall bladder issues). ‘Only an hour’s difference between a good meal and a poor one.’ (And she didn’t mean in the cooking. Also worked on the theory that as long as the gravy was hot it didn’t matter if some other elements of the meal had had to wait.) A fussy person was ‘like a hen with one chick,’ and the dilatory were ‘slower than molasses in January.’ (Again, surely these are common? Or are they disappearing?) My mother frequently and without heat would suggest that if we didn’t ‘straighten up’ she was going to ‘break off our arm and beat us with the bloody stub.’ No offense meant, none taken. My grandmother would only suggest we might get ‘what Paddy gave the drum’ (which I didn’t understand at the time, though the message was clear.)”

There are a few more in the comments at Language Hat.
Ben Ostrowsky recommends the book Like We Say Back Home. And Jag Bhalla has collected idioms from around the world in I’m Not Hanging Noodles on Your Ears.

Finally, Daniel Radosh was intrigued by “Rich enough to burn a wet dog,” one of my grandmother’s favorites, and did some Internet research. He writes, “Only found one explanation, in a radio podcast. ‘Enough money to burn a wet dog (or mule)’ = you need a lot of tinder (paper money) to get the fire hot enough. From the 1880s.”
My great-grandmother, Alma Kinchen Johnston, stands at the far left in the image at the top of this post. I’m guessing part of her family had gathered for a funeral when this photo was taken, but I don’t really know.

In which I become a Geoff Dyer fan

It meant nobody had killed her yet