The hot young author debate, circa 1882

Shallow it could be, but new? Probably not.

Consider the collection, in the current Harper’s, of journalists’ reports on the flamboyant clothes Oscar Wilde wore in 1882 while traveling the U.S. and Canada for a speaking tour. Here’s a sampling:

· A sealskin cap many sizes too small for him;

· A velvet jacket, concerning the fit of which he should have a word with his tailor; and

· A boutonniere, somewhat withered, made up of heliotropes, a brightly foliated daisy, and a tuberose.

The American public was charmed by the young author — “the slang of the moment included such supposedly Wildean expressions as ‘too utterly utter,’ ‘just too too,’ and ‘do you yearn?'” — but Wilde’s detractors were legion.

Ambrose Bierce in particular had little patience for his showy antics; the elder writer excoriated Wilde in the March 31, 1882, edition of San Francisco’s “The Wasp.”

That sovereign of insufferables, Oscar Wilde has ensued with his opulence of twaddle and his penury of sense. He has mounted his hind legs and blown crass vapidities through the bowel of his neck, to the capital edification of circumjacent fools and foolesses, fooling with their foolers. He has tossed off the top of his head and uttered himself in copious overflows of ghastly bosh. The ineffable dunce has nothing to say and says it — says it with a liberal embellishment of bad delivery, embroidering it with reasonless vulgarities of attitude, gesture and attire. There never was an impostor so hateful, a blockhead so stupid, a crank so variously and offensively daft. Therefore is the she fool enamored of the feel of his tongue in her ear to tickle her understanding….

And this gawky gowk has the divine effrontery to link his name with those of Swinburne, Rossetti and Morris — this dunghill he-hen would fly with eagles. He dares to set his tongue to the honored name of Keats. He is the leader, quoth’a, of a renaissance in art, this man who cannot draw — of a revival of letters, this man who cannot write! This little and looniest of a brotherhood of simpletons, whom the wicked wits of London, haling him dazed from his obscurity, have crowned and crucified as King of the Cranks, has accepted the distinction in stupid good faith and our foolish people take him at his word. Mr. Wilde is pinnacled upon a dazzling eminence but the earth still trembles to the dull thunder of the kicks that set him up.

According to the Virtual Museum of the City of San Francisco, this “vicious Keller cartoon, ‘The Modern Messiah,’ appeared in … The Wasp … during Wilde’s stay in San Francisco.” 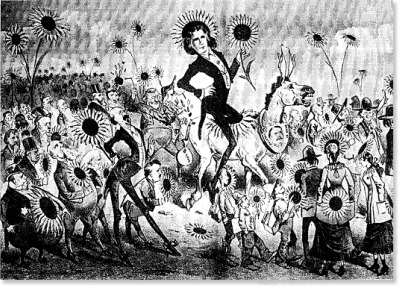 The admiring throng surrounding Wilde and his horse evidently includes many members of San Francisco society; as for the sunflowers, they were one of many symbols of the Aesthetic Movement, which Wilde popularized.