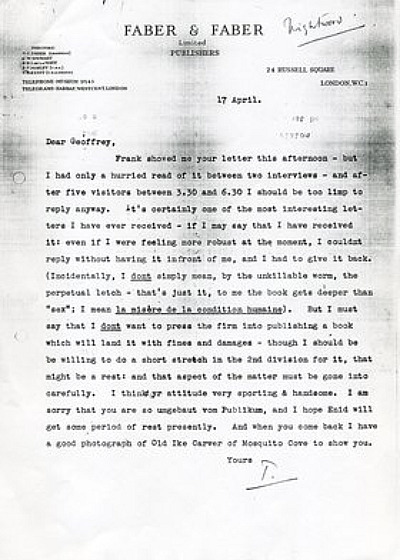 T.S. Eliot’s 1936 letter to Geoffrey Faber about Djuna Barnes’s Nightwood refers to possible “fines and damages” the publisher might face for publishing the book that ultimately became known, in the words of Jeanette Winterson, as “an important milestone on any map of gay literature — even though, like all the best books, its power makes a nonsense of any categorisation, especially of gender or sexuality.” (Thanks to Alex Chee for the link.)

Nightwood later appeared with a preface from Eliot, who edited the manuscript to make it more palatable to readers of the day. Dalkey Archive Press printed a restored edition, with notes, in 1995.