C.S. Lewis and the angel & devil on your shoulder 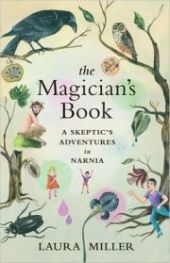 The other night Max and I were talking with his dad about C.S. Lewis, a writer whose ideas about religion and culture they’re both considerably more persuaded by than I am. (To say the least. Fortunately, my response to books like Mere Christianity has softened over the years into a sort of incredulous amusement.)

Because Max and I both enjoyed the Narnia books, inevitably we all ended up on the subject of Lewis’ affection for allegory. This passage from Laura Miller’s The Magician’s Book: A Skeptic’s Adventures in Narnia offers the most insightful overview I’ve seen of his perspective:

Lewis felt that [the] all-too-common, slapdash interpretation of allegorical figures — describing them as merely “standing for” something else — missed the point. If, while reading The Romance of the Rose, we see Shame and Fear as no more than broad abstractions (much like the statue symbolizing Justice mounted over many a courtroom), we miss the richness of medieval allegory, and its intimacy. What we must first remember, Lewis argued, is that the friendly and hostile figures the lover meets are contained within the lady he loves. “Her character,” he write, “is distributed among personifications.”

What made allegory powerful, and in Lewis’s eyes “realistic,” is that it was a sophisticated way of representing the inner lives of human beings at the time the great allegories like The Romance of the Rose were written. Though we now take for granted the notion of psychologically conflicted characters (who are “torn” or “divided” by forces contained within their own hearts and minds), the medievals didn’t have an artistic and conceptual toolbox quite like our own. Instead of imagining each person as possessing a complex interior mental space full of warring impulses, their picture of character was more external. So for them, the natural way to portray what we would decribe as a debate within a person’s psyche would be to write a passage in which a figure labeled (for example) Reason stands in a garden quarreling with a figure called Passion. (One of the few pop culture remnants of this kind of representation are the little angel and devil who are sometimes drawn sitting on opposite shoulders of a cartoon character, each arguing for a different course of action. They are depicted outside of the character’s body, but they represent elements of his personality.)

The Romance of the Rose features a garden within a garden, where most of the action (such as it is) takes place; the inner garden is the mind and heart of the lady the lover woos. In a true allegory, where aspects of a woman’s personality are made to walk about and otherwise behave like independent people, the woman herself — the territory on which the conflict is being played out — becomes a physical space, a plot of land. The medieval self is, in this sense, geographical.

It’s helpful to keep this in mind when thinking about the difference between, say, a modern novel of psychological realism and some varieties of fantastic fiction, what Lewis called “fairy tales.”

Greene juvenilia to be published