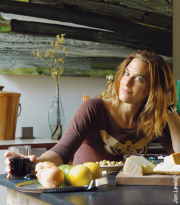 It’ll be raining for the next week anyway, so why not brave the G train and the weather tonight, and come out to celebrate the publication of the amazing Kate Christensen’s Trouble, with some sangria and salsa at WORD?

She’ll read, and I’ll interview her briefly, and it might even be more fun than our last night out — barbecue followed by rock & twang (live-band) karaoke, all in the company of one D.E. Rasso. If so, you don’t want to miss it. (You can read our prior conversation, about her last novel, The Great Man, here.)

Meanwhile, Amy Benfer has a Christensen Q&A at Salon today. “No one ever uses the term ‘limited first-person,'” Kate says. “But that’s the voice I’m most comfortable in.” More:

In your first novel, “In the Drink,” the protagonist, Claudia, was a young New York woman around the same age you were when you wrote it. Whereas the characters in your last three novels were very obviously different from you: The title character in “Jeremy Thrane” was a gay man, Hugo in “The Epicure’s Lament” was a middle-aged misanthrope, and Teddy was in her 70s. Josie, once again, is your current age, 46. She is a therapist on the Upper West Side, and you are a writer in Brooklyn, but it seems the two of you could easily run in similar circles. Was it scary to have a character whom readers might mistake for you?

It was totally scary. She’s so not me. Because we’re the same age, and because people confuse fact and fiction, inevitably they will think it must be autobiographical, and that Josie must be some version of me. I felt about Josie much the same way I felt about Hugo and Jeremy and Claudia, who also is and is not me: a feeling of identification with them but also a sense of detachment. Jeremy Thrane is the most like me and that is the most autobiographical of all my novels.

And he’s the one least likely to ever be confused with you.

Exactly. Because he’s a gay man. I find Josie to be kind of annoying sometimes — annoyingly opaque and clueless and kind of self-involved. I wanted to make her flawed and not heroic. Those are the kind of people I find most interesting. If she’s a part of me, it’s not my best self. Often I choose characters who express not my best self, but the sides of me I haven’t developed or haven’t expressed.

Coetzee reads from Summertime in Oxford

Bierut on the modern banknote