Pulling Thomas Mann’s The Magic Mountain off the shelf 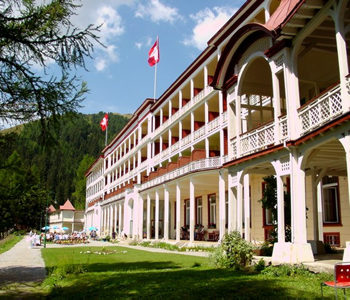 My father-in-law — a warm, funny, and brilliant man of idiosyncratic passions, the only person I know who’s read Twain’s Is Shakespeare Dead? and enjoys it as much as I do — was diagnosed with multiple myeloma last fall.

It’s a terrible disease (and rare, except for those who, like him, were exposed to Agent Orange), but treatments have improved and it was caught at an early stage. We are all crossing our fingers.

While in the hospital last week, he told me that he’s reading Thomas Mann’s The Magic Mountain.

I’ve started and abandoned the novel several times over the years, but I pulled it off the bookshelf a few days ago and am determined to read along with him, this time being mindful of A.S. Byatt’s experience:

my own early readings of The Magic Mountain, impeded by scholarly earnestness … and baffled by an inadequate translation, quite failed to see how funny, as well as ironic and subtle, much of the argumentation and debate is.

Byatt concedes that “an enormous proportion of the novel consists of bravura descriptions of battling ideas, and it is fashionable now to dismiss Mann as a ‘dry’ (even dessicated) ‘novelist of ideas,’ as though that description meant that he did not understand human feeling, or passion, or tragedy.”

You can read (most of) Byatt’s introduction to The Magic Mountain here. The image above is of the Schatzalp — originally an art nouveau luxury sanitorium, and now a hotel — where the novel is set. (Petya writes to say that it’s pretty affordable — around $100 per night, possibly including breakfast and dinner — in the off-season.)

My grandpa was born 102 years ago on this day. I m

Their friendship makes me so happy

I’m honored and happy to report that ANCESTOR TR

I’m grateful for this nice review in @publishers