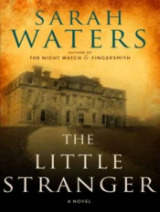 My appreciation of Sarah Waters’ The Little Stranger is up at NPR. Here’s an excerpt:

For a writer so gifted at conjuring worlds in which unspoken longings seem to manifest themselves as otherworldly phenomena, British novelist Sarah Waters is surprisingly dismissive of her own superstitions, which she sees as symptomatic of her lower-middle-class origins. Her grandparents worked as servants, her parents were the first in the family to attend grammar school, and the Tipping the Velvet and Fingersmith author learned early on to touch wood, cherish the Catholic saints, and worry that it would be bad luck to try to move too far beyond the station to which she was born.

Class anxiety is the animating force behind Waters’ fifth book, The Little Stranger, a suspenseful and psychologically layered haunted-house story set in the aftermath of World War II, when the fading gentry collided with the emerging professional class that would once have been the help. The novel opens as its narrator, Dr. Faraday, arrives at Hundreds Hall, the Ayers family manor, to treat the maid. Faraday quickly realizes the girl is fine; her real affliction is not a stomachache but an ignorant and, to a medical man, wholly frustrating terror of ghosts. It’s the condition of the house itself, now a grim structure crumbling in a thicket of weeds, that worries him. His late mother had once been a servant there, and when Faraday was a boy the majesty of the place had filled him with such yearning that he’d sawed away at a decorative acorn with his penknife and slid it into his pocket.

For background on the author and her work, try Robert McCrum’s glowing Guardian profile. Elsewhere, Waters explains that The Little Stranger was inspired by Josephine Tey’s 1948 detective novel, The Franchise Affair, which in turn had its origins in a real-life scandal. (Via and via, respectively.)

Inside the paperback book launch