Greene, Waugh, and the force of warmth 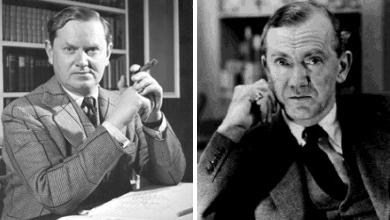 Among the highlights of Graham Greene: A Life in Letters are the author’s Catholicism squabbles with Evelyn Waugh.

Here — to follow up on some recent thoughts about the melding of fact and invention in fiction — is an excerpt from a January 4, 1961, letter from Greene to Waugh. This missive was prompted by Waugh’s excoriation of A Burnt-Out Case, which he dismissed as technically deficient, absurdly melodramatic, and a sign that Greene’s skills were fading. Also, he believed the book caricatured Greene’s Catholic admirers, including himself. Wrote Greene:

With a writer of your genius and insight I certainly would not attempt to hide behind the time-old gag that an author can never be identified with his characters. Of course in some of Querry’s reactions there are reactions of mine, just as in some of Fowler’s reactions in The Quiet American there were reactions of mine. I suppose the points where an author is in agreement with his character lend what force of warmth there is to the expression. At the same time I think one can say that the parallel must not be drawn all down the line and not necessarily to the conclusion of the line. Fowler, I hope, was a more jealous man than I am, and Querry, I fear, was a better man than I am. I wanted to give expression to various states or moods of belief and unbelieve. The doctor, whom I like best as a realized character, represents a settled and easy atheism; the Father Superior a settled and easy belief (I use ‘easy’ as a term of praise and not as a term of reproach); Father Thomas an unsettled form of believe and Querry an unsettled form of disbelief. One could probably dig a little of the author also out of the doctor and father Thomas!

LaValle’s next out in August