Once more, with feeling: Who Is Mark Twain? 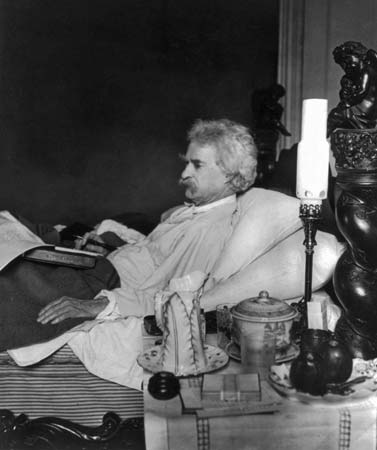 My latest NPR appreciation is of Who Is Mark Twain?, a collection of previously unpublished writings by my favorite essayist. Here’s an excerpt:

Best known for crowd-pleasers like Tom Sawyer and Huckleberry Finn, and for his lucrative speaking tours, Mark Twain was a writer whose livelihood depended on maintaining enough down-home affability to appeal to the masses. Yet as we see in Who Is Mark Twain?, a new collection of previously unpublished writings, he fantasized constantly about the freedom death would bring.

Among the writings left behind at Twain’s death in 1910, at age 74 — in his “large box of Posthumous Stuff” — were squibs, rants, unfinished essays and his most heretical and passionate work, Letters From The Earth, a satirical attack on Christianity so scathing that his daughter forbade its publication until the 1960s.

Weekend Edition ran an interview with Robert Hirst, the editor of the collection and head of the University of California Berkeley’s Mark Twain Project.

Previously on Twain (a sampling): Twain’s manufactured, curiously theological thoughts on Shakespeare (in which my obsession begins); Send up the clowns; In the beginning, again, with Alter (and Twain); Fear of burning out on a writer; The New Yorker, Mark Twain, and Christians live forever; Whenever Twain was about to publish a book.