On U.S. evangelicalism & the free market 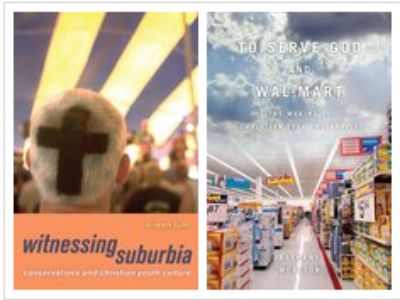 For the summer issue of Bookforum, I wrote a joint review of Eileen Luhr’s Witnessing Suburbia, on the development of the Christian youth culture, and Bethany Moreton’s excellent To Serve God and Wal-Mart, on the making of Christian free enterprise. Here’s an excerpt:

Books claiming to decipher evangelical Christianity for the secular reader are nothing new, but the Bush years ushered in the genre’s golden age. Following the 2000 election, scores of pundits sought to explain the rise of the Christian right, and some of their efforts were worthwhile. For The Great Derangement, Matt Taibbi went undercover at a fundamentalist retreat that culminated with a mass exorcism where he was encouraged to vomit up demons, and he walked away understanding how easy it could be to “bury your ‘sinful’ self far under the skin of your outer Christian.” D. Michael Lindsay conducted interviews with evangelicals in business and politics for Faith in the Halls of Power and (perhaps to a fault) allowed them to speak for themselves.

Yet many recent guides to evangelicalism are vastly oversimplified, if not aggressively disingenuous. The worst are the Red America manuals that issue forth from career contrarians like David Brooks, who concocts a thesis about homely red-state virtues and works backward — making a few trips across state lines to churches, auto-body shops, and Red Lobsters — in search of anecdotes to support it. And in the era of family values and untrammeled free enterprise, a host of professional opinion mongers affected to don evangelical-tinted glasses through which they reassessed and cast doubt on progressive ideas that had entered the mainstream in prior decades. Never mind that “evangelical” is a slippery category, prone to many opportunistic manipulations. Do we count the Charismatics? PCA Presbyterians? Tongues-speaking Episcopalians? There are many camps along the spectrum of American Protestantism — camps often hostile to one another — and as a child I was dragged through a number of them.

In the post-Bush era, some of the most reductionist punditry on the evangelical scene has receded, leaving room for serious inquiry into how the past eight years came about. To that end, Eileen Luhr’s Witnessing Suburbia is a diligent and informative, if somewhat muddled, exploration of the ways mainstream evangelicals’ attitudes toward popular culture have evolved in the past forty years.

You can read the rest here.

The Luhr book deals primarily with Christians’ appropriation of popular culture, particularly rock, metal, and punk, and the emergence of the “MTV approach to evangelicalism” as an industry. Recently a friend pointed me to a fascinating 1980s documentary that suggests rock and evangelical revivals were linked from the start. See Rock my Religion: Where Shakers & Patti Smith meet?

This year I’ll be the guy in the codpiece