On Season of Migration to the North 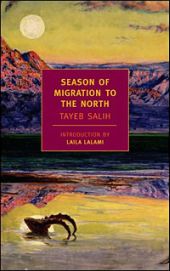 My current NPR appreciation is of the late, great Tayeb Salih’s Season of Migration to the North,

an engaging and complicated novel, by turns combative and wistful, about two men who leave the Sudan to study in England and afterward belong in neither place.

As Laila Lalami observes in her introduction to the New York Review of Books reissue, the book’s happy life in translation is something of an aberration. Most classics of Arab literature remain unavailable in the States despite the public’s growing appetite for translated fiction. Yet Season of Migration to the North first appeared in English in 1969, only three years after its original publication in the author’s native Arabic. Both because of its accessibility and because of its deep insights into the complexities of life in a colonized place after the colonizers depart, it has taken its place, along with Joseph Conrad’s Heart of Darkness, at the core of the university postcolonial literature curriculum.

You can read the rest — and, more importantly, an excerpt from the novel — at the NPR site.

While I’m away, a shot from back home