Below writer and professor Carrie Spell offers an appreciation of her former writing instructor Mary Robison’s latest novel, One D.O.A. One on the Way, in the context of the author’s larger body of work. 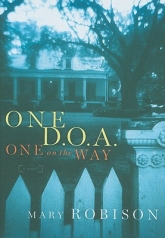 In their memoir Double Down, Frederick and Steven Barthelme describe a trip to a Mississippi Gulf Coast casino with their colleague, story writer and novelist Mary Robison. Robison — along with the Barthelmes — was my teacher at the University of Southern Mississippi, and their description of her always struck me as perfect:

“That’s all I’ve got in my pocket,” she says, pretending this is a very important distinction. “I’ve got my credit cards. But I can’t lose a penny,” she says.

She loves the sound of words, and this is evident in her work, even if the words don’t always seem to do what we need them to. Take, for example, the following section of her novel Why Did I Ever:

Hollis and I have killed this whole Saturday together. We’ve watched fourteen hours of the PBS series The Civil War.

Now that it’s over he turns to me and says, “That was good.”

Two characters spend fourteen hours watching an epic documentary, one that took Ken Burns years to research and film, and the only way to respond is, “That was good.” The seeming inadequacy of these words brings about their beauty and humor. The passage is actually reminiscent of the creation story in Genesis. God spends six days on the world: letting there be light, separating night and day, adding water and heavens and earth, giving life to the wild animals. God then looks over his creation, and how was it? “It was good.” Robison creates a paradox in which people sound careless, when, in fact, they are being as precise as possible.

Amid these seemingly minute interactions, we find the guts of Robison’s work: dead parents, children left alone in snowstorms, women with cancer, cats missing, women with dying husbands. Because of her constant use of compressed space — three pages for the widely anthologized story “Yours,” or a novel composed of 536 tiny vignettes as was the case with 2001’s LA Times Book Award winner Why Did I Ever — critics often rush to label Robison a minimalist.

You’ll find this information in any article on her work, just as you’ll also learn that she hates the term minimalist and prefers subtractionist because, as she claims in an interview with BOMB magazine’s Maureen Murray, “that at least implied a little effort. Minimalist sounded like we had tiny vocabularies and few ways to use the few words we knew.”

The people Robison creates may avoid spelling out their every emotional response, but they do continually regale us with sharply and deeply observed facts about their surroundings. The narrator of the story â€œI Am Twenty-One,â€ originally published in the collection An Amateurâ€™s Guide to the Night and reprinted in Tell Me: 30 Stories, complains of another college student, â€œHe was a quitter, a skimmer, I decided; a person who knew shit about detail.â€ Attention to detail is Robisonâ€™s skill, a trait she attaches to her characters which seems to keep their lives in order when everything else defies control.

This is certainly true in Robisonâ€™s latest novel, One D.O.A. One on the Way. Like her previous novel Why Did I Ever, the new one is constructed of short vignettes. The narrator, Eve Broussard, is a film location scout in New Orleans, her work having dried up after Hurricane Katrina. She lives with her husband, Adam, who is sick with Hepatitis-C, and his twin brother Saunders, with whom she is having an affair while his wife is in a psychiatric hospital, in the mansion of their wealthy parents.

Eve begins the novel by telling us that sheâ€™s stepped on â€œa rusty fucking nailâ€ and goes on to explain that this happens to everybody â€” the novel being set in post-Katrina New Orleans. Robison then writes, â€œThereâ€™s a little window period with Tetanus, of about twenty-four hours.â€ Absolute fact. Check.

One D.O.A. also includes a recurring thread of bulleted facts not only about New Orleans but also about guns:

Robison has always written about disorder, but now that sheâ€™s writing about New Orleans and its lack of recovery, she provides a new dimension. The ruins of the landscape and its people let us know that Eve is not the only one suffering and unsure. In one scene at a restaurant, she observes a father forcing his son on all fours to eat off a plate on the floor, the man gripping the boyâ€™s neck. Patrons leave, and everyone is appalled, but no one does anything, including the narrator herself who can only observe and report.

Eve also makes other, sometimes absurd lists â€” of things stolen by her young kleptomaniac niece, Collie, and of things sheâ€™ll never do again, like â€œwearing the Trotsky t-shirt or newspaper hat to church.â€

These lists are the rules, a way these characters make sense of disorder, no matter how arbitrary. Actual rules no longer exist â€” especially in New Orleans â€” so they stick to whatever they know. For example, Eve learns in the first couple of pages that her assistant, whom sheâ€™s been calling Lucien, is actually named Paul. She continues to call him Lucien. And Lucien has his own rules. When finding someone elseâ€™s handwritten grocery list, he decides that the â€œobvious conclusion is, buy everything on the list.â€

Through it all, Robison also reminds us of just how beautiful this world is, with sky that is â€œa grape colorâ€ and â€œtree-lined avenues, fields of indigo, King cotton, cane, cows, high tension lines, cricket oil wells, now stretches of winding country roads, moss-covered monuments, oddly still bayous, long alleys of arching Live Oak trees.â€ Yet despite the loveliness of this description, something sinister lurks behind those images of the old South â€” King cotton and moss-covered monuments reminding us of the racist, violent Southern past that unfolded on these bucolic country roads with their lazy cows. This is the strength of Robisonâ€™s work, the insistence on writing of an America as it is lived, warts and beauty, word for word.

For more praise of One D.O.A., One on the Way, see Daniel Handler’s NYTBR review and the unsigned “briefly noted” piece at The New Yorker.

Hannah on writing and Twain