Whenever Twain was about to publish a book 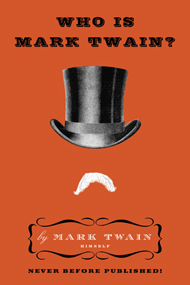 As a bona fide Twain obsessive, I am of course almost unnaturally excited about Who Is Mark Twain?, a forthcoming compilation of some of the Huck Finn author’s previously unpublished work.

Last December The New Yorker offered a preview: “The Privilege of the Grave,” which sheds light on Twain’s thoughts about death and posthumous publication.

Now B&N Review provides another excerpt, Whenever I Am about to Publish a Book. Here the author claims that, before committing fully to publishing a work, he always read the manuscript “to a private group of friends, composed as follows”:

1. Man and woman with no sense of humor.

2. Man and woman with medium sense of humor.

3. Man and woman with prodigious sense of humor.

6. Person who must have a moral in, and a purpose.

8. Enthusiast — person who enjoys anything and everything, almost.

9. Person who watches the others, and applauds or condemns with the majority.

10. Half a dozen bright young girls and boys, unclassified.

12. Person who detests them.

Twain was preoccupied not only with predicting the public’s reaction to his work (and setting aside the most inflammatory stuff for publication after his death), but with preserving memory.

Pictured below is a dubious game of his creation. According to one critic, it looked “like a cross between an income tax form and a table of logarithms.”

The line between writing and remembering and thinking

Thoreau, scourge of the Concord Woods