PDAs of the ancient Sumerians 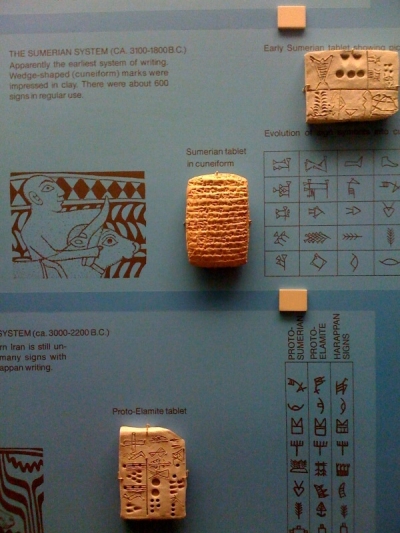 Last month Peter Campbell, writing about the British Museum’s Babylon, Myth and Reality exhibition, observed, “Held in the hand, a typical cuneiform tablet is about the same weight and shape as an early mobile phone.”

Hold it as though you were going to text someone and you hold it the way the scribe did; a proverb had it that “a good scribe follows the mouth.” Motions of the stylus made the tiny triangular indentations of cuneiform characters in the clay. The actions would have been much quicker and more precise, but otherwise rather like the pecks you make at a phone keypad.

Visiting the American Museum of Natural History this afternoon, I stood in front of an early writing display I’ve seen probably five or ten times and was amazed to see how right he is: these Sumerian and Proto-Elamite tablets are very nearly the same size as my iPhone. I held it against the glass to take the photo.