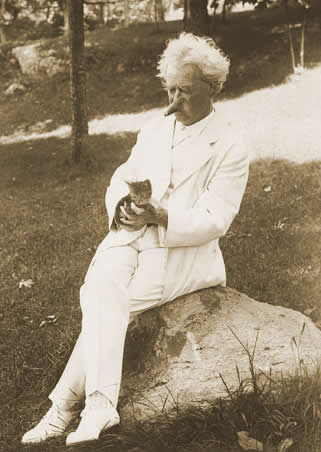 The New Yorker recently made everything — from its very first issue to the latest — available to subscribers online. This means you can read Mark Twain’s “The Privilege of the Grave” right now.

Although previously unpublished, the essay will be immediately recognizable as Twain’s to anyone who’s had even casual exposure to his nonfiction. Here’s a brief excerpt from the beginning:

Its occupant has one privilege which is not exercised by any living person: free speech. The living man is not really without this privilege — strictly speaking — but as he possesses it merely as an empty formality, and knows better than to make use of it, it cannot be seriously regarded as an actual possession. As an active privilege, it ranks with the privilege of committing murder: we may exercise it if we are willing to take the consequences. Murder is forbidden both in form and in fact; free speech is granted in form but forbidden in fact. By the common estimate both are crimes, and are held in deep odium by civilized peoples.

Toward the end, he says:

Sometimes my feelings are so hot that I have to take to the pen and pour them out on paper to keep them from setting me afire inside; then all that ink and labor are waste, because I can’t print the result…. It does my weather-beaten soul good to read it, and admire the trouble it would make for my family.

He resolves to leave the inflammatory work behind, and “utter it from the grave,” since nobody bothers to hold a grudge against a dead person.

When he wrote this essay, Twain was almost certainly thinking of his Letters from the Earth, an indictment of Christianity so scathing that his wife refused to discuss it with him, and his daughter held up its publication for decades after his death.

Although the book is uneven, the best pieces in it are some of Twain’s strongest work. (And I say this as a Twain fanatic.) They engage with Christianity on its own terms and highlight its illogic without resorting to the supercilious, you-idiots! tone of a Richard Dawkins or Sam Harris or Christopher Hitchens. Unlike those men, whose real aim, or at least only real hope, is to galvanize atheists and convert agnostics, Twain is a true satirist whose intended audience is people who are, as he was, raised in the church.

And his rhetoric is a powerful tonic for believers. A good friend’s father, who was a missionary, lost his faith for many years after reading Letters from the Earth. (I’ve said most of this before; I’m so obsessed with the Letters from the Earth, I once started posting it line-by-line at Twitter.)

“The Privilege of the Grave” is not Twain’s only work that depicts death and the grave as the reward of the longsuffering. One of the best passages of Satan’s tenth letter, which is collected in Letters from the Earth, begins:

In time, the Deity perceived that death was a mistake; a mistake, in that it was insufficient; insufficient, for the reason that while it was an admirable agent for the inflicting of misery upon the survivor, it allowed the dead person himself to escape from all further persecution in the blessed refuge of the grave. This was not satisfactory. A way must be contrived to pursue the dead beyond the tomb.

The Deity pondered this matter during four thousand years unsuccessfully, but as soon as he came down to earth and became a Christian his mind cleared and he knew what to do. He invented hell, and proclaimed it.

It is not a boner to use effete this way — DFW