On (and from) Graham Greene: A Life in Letters 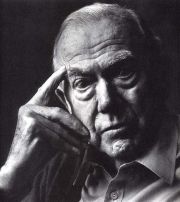 Richard Greene’s Graham Greene: A Life in Letters, finally published in the States early next month, collects a wide sampling of the author’s voluminous correspondence and is, for any admirer of the work who’s interested in understanding the author, an indispensable resource.

Greene was a passionate man, a stubborn man, a sometimes-loyal but often-disloyal (sometimes rather self-importantly so) man, and an occasionally suicidal manic-depressive. He was surprised in the mid-1930s to find, when he contracted a fever that nearly killed him, “a passionate interest in living.” “I had always assumed before,” he wrote in Journey Without Maps, “that death was desirable.”

I revere some of Greene’s fiction — the Catholic trilogy in particular — but often disagree with his opinions, the finer shades of them, at least. Still, his intensity and thoroughgoing analysis are a source of endless fascination. Here’s an excerpt from a letter he wrote to Elizabeth Bowen as part of a discussion between the two of them and V.S. Pritchett that was published in Why Do I Write? and aired as a discussion on the BBC Third Programme on October 7, 1948.

When your letter came, I had just been reading Mrs. Gaskell’s Life of Charlotte Brontë, and this sentence from one of Charlotte Brontë’s letters recurred to my mind. It certainly represents my view, and I think it represents yours as well: ‘You will see that Villette touches on no matter of public interest. I cannot write books handling the topics of the day; it is of no use trying it. Nor can I write a book for its moral. Nor can I take up a philanthropic scheme, though I honor philanthropy…

‘The relation of the artist to society’: it’s a terribly vague subject, and I feel the same embarrassment and resentment as you do when I encounter it. We all have to be citizens in our spare time, standing in queues, filling up income tax forms, supporting our families: why can’t we leave it at that? I think we need a devil’s advocate in this discussion to explain the whole thing to us. I picture him as a member of the PEN Club, perhaps a little out of breath from his conference in Stockholm where he has been discussing this very subject (in pre-war times he would have returned from the Adriatic — conferences of this kind were never held where society was exactly thick). Before sitting down to add his signature to an appeal in The Times (in the thirties it would have proudly appeared with Mr. Forster’s, Mr. Bertrand Russell’s and perhaps Miss Maude Royden’s), he would find an opportunity to tell us what society is and what the artist…

First I would say that there are certain human duties I own in common with the greengrocer or the clerk — that of supporting my familiy if I have a family, of not robbing the poor, the blind, the widow or the orphan, of dying if the authorities demand it (it is the only way to remain independent: the conscientious objector is forced to become a teacher in order to justify himself). These are our primitive duties as human beings. In spite of the fashionable example of Gauguin, I would say that if we do less than these, we are so much the less human beings and therefore so much the less likely to be artists. But are there any special duties I owe to my fellow victims bound for the Loire? I would like to imagine there are none, but I fear there are at least two duties the novelist owes — to tell the truth as he sees it and to accept no special privileges from the state.

And another excerpt, from a letter to V.S. Pritchett:

The last time I received a letter in this seiries I was reading the Life of Charlotte Brontë, and the change of mood may account for my uneasy suspicion that in my last letter I simplified far too much. Perhaps that magnifient poem, ‘The Song of the Shirt’, has unduly influenced me, for I am not quite so sure now that the writer has no responsibility to society or the State (which is organized society) different in kind from that of his fellow citizens.

You remember Thomas Paine’s great apothegm, ‘we must take care to guard even our enemies against injustice,’ and it is there — in the establishment of justice — that the writer has greater opportunities and therefore greater obligations than, say, the chemist or the estate agent. For one thing he is, if he has attained a measure of success, more his own master than others are: he is his own employer: he can afford to offend; for one of the major objects of his craft (I speak, of course, of the novelist) is the awakening of sympathy. Now the State is invariably ready to confuse, like a schoolmaster, justice with retribution, and isn’t it possibly the storyteller’s task to act as the devil’s advocate, to elicit sympathy and a measure of understanding for those who lie outside the boundaries of State sympathy? But remember that it is not necessarily the poor or the physically defenseless who lie there. The publicans and sinners belong to all classes and all economic levels. It has always been in the interests of the State to restrict sympathy, to encourage cat-calls — Galilean, Papist, Crophead, Fascist, Bolshevik. In the days of the totalitarian monarchy, when a sovereign slept uneasily with the memories of Wyatt, Norfolk, Essex, in his dreams, it was an act of justice to trace the true source of action in Macbeth, the murderer of his king, and Shakespeare’s play has for all times altered our conception of the usurper….

I hope I have made it clear that I am not advocating an conscious advocacy of the dispossessed, in fact I am not advocating propoganda at all…. If we can awaken sympathetic comprehension in our readers, not only for our most evil characters (that is easy: there is a cord there fastened to all hearts that we can twitch at will), but of our smug, complacent, successful characters, we have surely succeeded in making the work of the State a degree more difficult — and that is a genuine duty we owe society, to be a piece of grit in the State machinery. However acceptable the Soviet State may at the moment find the great classic writers, Dostoevski, Tolstoy, Chehov, Turgenev, Gogol, they have surely made the regimentation of the Russian spirit

The TLS reviewed the book in early 2007. I’ll be giving away a copy on the pub date, so if you’re a Greene fan, check back then.