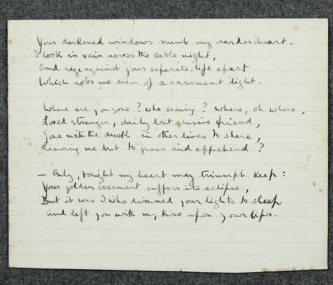 “This Perpetual Fight: Love and Loss in Virginia Woolf’s Intimate Circle” assembles manuscripts, letters, inscribed books, and photos — some never before been exhibited publicly — from collections across the country. Curated by Sarah Funke and William Beekman, the exhibit examines how Woolf’s life and art were influenced by her friends, and how their experiences resonate in her greatest literary works: Mrs. Dalloway, To the Lighthouse, Orlando, and A Room of Oneâ€™s Own.

The title of the exhibit is drawn from an entry in Virginia Woolfâ€™s diary in which she is reflecting on the death of her good friend Roger Fry:

I had a notion that I could describe the tremendous feeling at Roger’s funeral: but of course I can’t. I mean the universal feeling: how we all fought with our brains, loves and so on: and must be vanquished. A fear then came to me, of death. Of course I shall lie there too before that gate, and slide in, and it frightens me. But why? I mean, I felt the vainness of this perpetual fight, with our brains and loving each other, against the other things; if Roger could die.

The â€œuniversal feelingâ€ was an express or implied theme in much of Virginia Woolfâ€™s fiction, and one that resonates with the story of her own life, from her troubled childhood, through her loss of family, friends and security in two World Wars, to her struggles with mental illness and her eventual suicide.

I’m especially interested in anything that sheds light on the Vita Sackville-West/Orlando story. (That’s a poem from Vita to Virginia, above, and Vita’s inscribed copy of Orlando will also be on display.)

“This Perpetual Flight” opens September 16 at the Grolier Club, and runs through November 22. If renovations are on schedule, the research library should also be ready for visitors by then.