Randa Jarrar and the great line of crazy hos 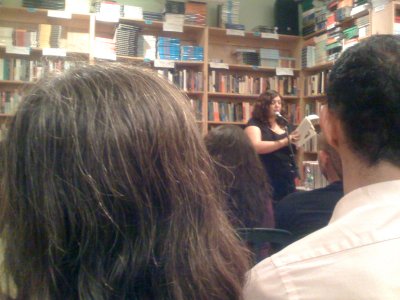 Spinoff from Hurricane Gustav didn’t dampen the turnout at Randa Jarrar’s Bluestockings reading a few weeks ago. The more the rain and wind picked up, the more packed the place became. Eventually I think people were standing.

In person Randa is every bit as vivacious and smart and funny as you’d expect if you follow her blog, Rockslinga — where she writes with equal facility about her envy of Iris Murdoch’s first novel and her sadness over the death of the “good old pearl ‘massager’” — or have read her hilarious new novel, A Map of Home, which she says she wrote because she wanted to express what it is to be a secular Arab transplanted to America.

The audience was captivated throughout her brief reading, and when she finished, a few people shouted, “Read more! Read more!” Soon a general cry rose up.

If you’ve lived in New York City for any length of time, you know this happens at a Sunday night reading about as often as the broken payphones get fixed — which is to say, almost never. Here, not for the easily offended, is part of what Randa read second.

In preparation for my statement of purpose, Baba ordered me to write essays, preferably in both English and Arabic, about something purely Arab, or relating to my Arabness, or to a famous Arab, every day. During this same period, he began to play the lotto. He asked me to bring him a sheaf of the red-numbered tickets, and dictated numbers to me while he lay on the faux-hardwood floor, his eyes shut, his moneymaking meditation in action. I filled in the circles with black pencil and he gave me $50, telling me he was glad I was around because he believed he would jinx the numbers if he paid for the bet himself.

Baba was terrified of taking a chance on his own writing, and preferred to play the lotto, and gamble that way.

He said there was no getting out of the compositions, which he pronounced â€œcombozishans,â€ and so I spent every weekend morning trying to come up with some bullshit so heâ€™d leave me alone for a night.

I come from a great line of crazy hoes. My great-great-grandmother Ibtisam grew up in a village in the Upper Nile valley and fought off rapists from the age of nine. She narrowly escaped getting circumcised by chaining her left ankle to a rail and telling my great-great-great-grandmother that she would not perform any of her required duties on the land unless she got to keep her clitoris — the first known clit-labor-strike in history — and so when all the girls went down to the Nile and threw their clits in it, as was the tradition, she was spared the sight of her own floating on the riverâ€™s surface like the button of a fishermanâ€™s vest that had been scrubbed too hard and come loose.

Her great-great-great-great-grandmother had been returning from a morning washing her two sonsâ€™ clothes at that very river, when Napoleonâ€™s army entered Egypt and one of his soldiers thought she was fly.

Barely eighteen years old, she gave birth to her first daughter, a result of the rape, who carried blue eyes in her milky face, and four legitimate children followed.

The blue-eyed one grew up to be a baby machine, ancestor to 19.2% of the blue-eyed citizens of current-day Egypt.

The one who got to keep her clit was not blue-eyed, so when she gave birth to a blue-eyed girl everyone wailed that she must have slept around with the English, and should have gotten her clit cut off to begin with, but her father defended her, reminding everyone of his blue-eyed ancestor, and everyone relented, the way all small villages quickly make celebrities and abandon them.

Mama married Baba, whose Mamaâ€™s Mama had deserted his Mama, practically selling her off to work for a family which was distantly related to Babaâ€™s Mamaâ€™s dead Baba.

That deserting Mama came from a bull of a Mama who had a veranda of a chest which she got from her Mama, whose nickname was Sakhra because her bosom was so immense her father made her lie on her back an hour each day beneath the weight of a giant Nablus rock which he had hoped would crush flat the giant tits; it didnâ€™t.

Sakhraâ€™s daughterâ€™s daughterâ€™s daughter gave birth to six daughters, three of whom had come with brothers in the womb; twins. The boys died within hours of their birth, so quickly that nobody sent for certificates of their births or their deaths, so that they were like light dreams that evaporate at the moment of awakening. The daughters grew to be plump and big-titted by the age of 10; even the ones who were left without covers in Nablus winters and the ones who were deliberately unfed for hours while the deserted daughter chanted and burned frankincense and prayed for the boysâ€™ lives, in vain.

The dead boysâ€™ sisters became famous because of their relentless will to live, and inspired a hikayye khuraffiyye — a fibula or a folktale — that the deserterâ€™s daughter had aborted the fifth one in the fifth month and threw her in the cistern, but the baby had lived anyway, climbing out of the water hole a few years later and demanding square cheese and bread. The fifth daughter always laughed at the story, with hoots and chuckles that were almost as big as her breasts.

The seventh pregnancy was the most unwanted: the deserterâ€™s daughter had had enough of her belly expanding and her back buckling. So when she gave birth to a boy, she instantly sent for his birth certificate (she wanted to name him Waheed, her husband insisted on Said), and all the six sisters gathered around him, and he went from ample bosom to ampler bosom, and he lived.

And twenty-five years later, he married my flat-chested mother, who gave birth to me, a dirty-green eyed big-titted mad stubborn crazy loving hoe.