Practical city living #12: Your cell on the subway tracks 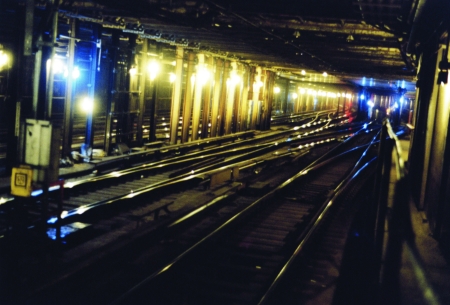 Whatever the limitations of the experience as a whole, here’s an advantage to reading a book on the iPhone: If you drop it, you don’t lose your place.

I had this reconfirmed this morning, when, as I dashed to the train, my phone slipped from my hands and plummeted to the subway tracks. There it lay, illuminated for a minute or two amid the straw wrappers and crushed soda cans, until it went dark.

I’ve always wondered what happens if something falls down near the rails — I mean, assuming you’re not willing to risk your life for it — and now I know: You go to the upper platform and notify the attendant, who calls the lost-object-picker-upper and tells you to stay where you are until he or she arrives, some 30 to 45 minutes hence.

Sure enough, two guys showed up a half-hour later, with one of those claw-hand poles, and retrieved the phone on the first try. I thanked them effusively and offered them money, but they wouldn’t take it.

Moments later the train pulled into the station. I climbed on, grabbed a pole, and picked up where I’d left off on Twain’s Life on the Mississippi ($1.34 at eReader).