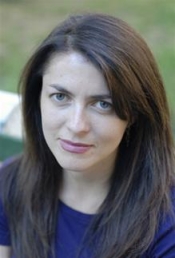 I cheated on the book I was supposed to be reading, and it was Irina Reyn’s fault. Her What Happened to Anna K., an extended homage to Tolstoy, was too finely-etched and captivating to put down.

“I love that mine is ‘the other book,'” she said, when I confessed my infidelity. “Rather perfect for the material, no?”

Reyn’s debut novel has been praised from coast to coast. Below Kevin Kinsella, MaudNewton.com’s Russian (and Russian-American) literature expert, talks with the author about Russia, America, Tolstoy, and the two Anna Ks’ paths toward doom.

Whenever a Russian publishes a novel in the United States, even if that novelist writes in English, American critics and book blurbers alike start bandying about names like Dostoyevsky! Tolstoy! Nabokov! Chekov! You can almost feel all the letter Rs in the title being bent in reverse on the cover so that a mere glance will evoke the Great Russian Soul that the book undoubtedly embodies.

One can easily imagine a new author quaking in her valenki when made to stand alongside such luminaries, but with What Happened to Anna K., debut novelist Irina Reyn embraces the dilemma and runs straight for the top of the Russian literary heap by invoking Anna Karenina all on her own. And, thankfully, there are no backwards Rs on her book’s cover.

Reyn, whose novel reimagines Tolstoy’s classic melodrama for our time, was born in Moscow and immigrated to New York City in 1981. Among other publications, her work has appeared in One Story, Post Road, Tin House, Los Angeles Times, Town & Country Travel, The San Francisco Chronicle, The Moscow Times, and numerous anthologies. In addition, Irina is the editor of Living on the Edge of the World: New Jersey Writers Take on the Garden State. Currently dividing her time between Pittsburgh and Brooklyn, she is Assistant Professor of English at the University of Pittsburgh.

I interviewed Reyn the week before What Happened to Anna K. was released.

Kevin Kinsella: What effect did invoking one of the great masterpieces of Russian literature (if not all literature) have on your writing? And why that novel?

Irina Reyn: As writers we tend to reference/invoke/engage in a dialogue with the writers who inspired us. With What Happened to Anna K., I explicitly call attention to this dialogue. One of the main techniques I admired in Tolstoy was the close way he depicted emotional shifts and nuances — the way Kitty’s heart sinks when she realizes Vronsky has not saved the crucial dance for her or the disillusionment Levin experiences once he finally gets the woman he has longed for. (The realization that not being happy with what you thought you wanted could be a tragedy all on its own.) I was also drawn to omniscient narration, to being able to speak directly to the reader, to assert the voice of the “author.” Ultimately, for me, Anna Karenina is one of the great novels of human observation.

KK: Clearly, your purpose wasn’t exactly to bring Tolstoy’s novel up to date, but there are several scenes that reference Anna Karenina in a direct way. Some that come to mind are when David and Anna meet at the subway station, when David trips and falls during the New York Marathon, just as Vronsky’s horse goes down in a steeplechase (I love that one, by the way), and, of course, the ending. What made you invoke the scenes you did, if your intention was not Anna Karenina redux?

IR: You’re right — I did not begin my novel with the idea of updating Anna Karenina. The connections only became obvious to me after I had written some stories and began to sew them together into a novel. Perhaps because I had read the Tolstoy book so closely and so recently, it began to inhabit my novel-in-progress. Once I made up my mind to make the allusions explicit, I purposely did not reread the book, but allowed the scenes that had spoken to me push their images onto the page. I did not transpose them literally — in my novel, for example, the ice skating scene between Lev and Katia has a very different aim from Tolstoy’s ice skating scene. The parallels between my book and the classic are less conscious than they may seem, which made the process of writing my novel an unusual one. It is this process, I think, that allows my novel to stand firmly on its own two legs.

KK: What was the biggest challenge presented by the Tolstoy connection?

IR: The biggest challenge was actually being bold enough to write it and managing to dispel the little Russian-Jewish voice inside my head that whispered, “Are you crazy? Who do you think you are — Tolstoy?”

KK: Actually, that “little Russian-Jewish voice” isn’t so little in What Happened to Anna K. Nor has it been little in the works of other recent Russian-American women writers — I’m thinking of Anya Ulinich’s Petropolis and Ellen Litman’s The Last Chicken in America. In your novel, Anna tries to isolate herself from the Rego Park community in which she’s grown up, even as she seems to be struggling to find her place within it, or at least a space that she can, on occasion, return to. With this novel, you join Lara Vapnyar and David Bezmozgis in portraying Russian Jews tangled in the curious mix of abundance and emptiness that characterizes American life — Anna leaves her son and the financial security of her Upper East Side marriage to Alex for a life with David, a Lower East Side academic and would-be novelist. This reversal of fortune causes no small tension between Anna and David, and the immigration aspect of the story really sets What Happened to Anna K. apart from Tolstoy’s Anna Karenina. Can you discuss this?

IR: For Anna K., immigration was a crucial event and I was interested in exploring not only its tangible consequences but its enduring role as a life narrative. In other words, how does a major incident in our past allow us to read and interpret our lives? What license does it allow? For Tolstoy’s Anna, her doom is partially caused by her own mind and particular disposition. The same is true of my Anna K.

KK: You were born in Moscow and immigrated in the 80s. How much of your book is autobiographical?

IR: I immigrated in 1981, so historically my immigration story is closely linked to Anna K.’s. I also grew up in Rego Park. Otherwise, I draw on certain facts of my life almost as often as I deviate from them. Also it is important to note that my novel, like Tolstoy’s, is equally concerned with a second narrative strand — in this case, that of Lev Gavrilov.

KK: In the novel, we get to see the beautiful Anna K. both from her own perspective and through the eyes of others (the videographer), and, in many ways, she’s not a very sympathetic character. How does her sense of herself differ from how she is perceived? What does being beautiful mean to Anna K.?

IR: It means all too much, unfortunately. Anna K. is a person whose self-conception depends on external validation. I don’t think this is an uncommon problem, particularly in societies that place significant emphasis on youth and beauty, and hope the reader will grow to empathize with Anna K. as much as I do.

KK: As you say, you immigrated from Russia in 1981… The people who make up Anna’s Rego Park life struggle to different extents with coming to terms with life in America. But Russia has changed so much since they left. Can they ever really return? Have you been back to Russia since you left?

IR: In What Happened to Anna K., a permanent return “home” is not an option, particularly because the émigrés don’t yearn for it. In real life, my parents and I went back to Moscow last summer– I wrote about the trip in the magazine Town & Country Travel. My parents and I probably experienced the city somewhat differently; having left at a young-enough age, I was able to enjoy the wild energy of the place unburdened by some of the nostalgia my parents felt. But that’s not to say the trip didn’t bring forth a host of complicated emotions.

KK: Can you name some writers (Russian and otherwise) who have influenced you and your work?

IR: Nabokov’s novels and Brodsky’s essays inspired me early on. Chekhov I grew to love, but the perfection of his work used to seem almost maddening so I preferred Dostoevsky’s rough edges. Milan Kundera, Salman Rushdie, Montaigne, Emily Brontë were read and reread. The writers that made me feel I could write were the “hyphenated” writers I discovered in the early 90s: Eva Hoffman, Richard Rodriguez, Andre Aciman, Chang-rae Lee. “At last,” I remember thinking. “Someone’s finally writing about me.”

End of a season

Why did it seem to them all like exile?