Happy weekend from the “Queen of Hell” 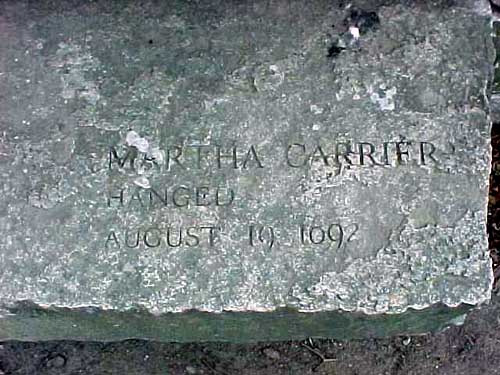 Kathleen Kent’s first novel, The Heretic’s Daughter, evokes the fears, diseases, and petty grudges of the witch trials era with an eerie, visceral concreteness. The book was inspired by Kent’s ancestor, Martha Carrier, who was jailed, tried, found to be a witch, and hung. To her dying breath, she refused to confess, or to beg for leniency. Below Kent answers my questions about the book and Carrier’s legacy.

I read in the Dallas Morning News that you first heard of Martha Carrier as a child at your grandma’s house, when she and your mom were gossiping about relatives. Was there a sense that Martha and her cruel treatment resonated in the present? What I mean is: In The Heretic’s Daughter, Martha and her daughter, Sarah, are forceful, prideful, and far too independent by the standards of their day. Did any of your relatives — particularly the women — seem destined to continue this legacy by bucking convention and refusing to defer to people in power?

I think one of the most remarkable aspects of the family stories about Martha Carrier was how present she seemed to me growing up. There was hardly a family gathering when her name wasn’t brought up. My mother’s family was very much interested in American history, as well as personal family history, and so there was a great awareness of the events leading up to the Salem witch trials.

Even though it was my grandfather who was the Carrier, my grandmother was the repository of all the generational legends and she was not only fiercely proud of the courageous stand Martha took against her accusers, but very gleeful of the fact that her outspokenness earned her the moniker “The Queen of Hell,” the name given to her by one of the most famous theologians of the day, Cotton Mather. There were quite a few ferocious, independent women in the Carrier family including my grandmother, who smoked at a time when it was considered scandalous, rode wild horses (and a few cows), and was a dead shot with a rifle.
There’s nothing like a ferocious Texan woman. (One of my most cherished photos is of my Dallas-born grandmother saluting with a double-barrel shotgun. She and I are also descended from an accused witch.)

In The Heretic’s Daughter, you chose to tell Martha’s story as fiction, through the eyes of the angry, somewhat estranged Sarah, and the results are remarkably textured and often very moving. Were you drawn to the novel form from the outset? Or did you ever think about writing a more factually-limited family history?

It was always my intent to write fiction. In the first draft, the narrative was in the voice of Martha, but, as there was so much of the family story left to tell after her death, I decided to shift it to Sarah’s point of view. I felt it would give the story greater emotional tension to see the horrors of the witch trials from a child’s perspective. I also felt that the struggle for understanding between a mother and daughter is a universal theme. Sarah’s character is based, in part, on my grandmother’s reckless and unconventional personality.
Early in the book, shortly after the family moves to a new town and is, after some debate (and intervention by the town elders), allowed to stay, one of the children is felled by smallpox. Sarah and her baby sister are shipped off in the night to live with their kind aunt and their entertaining, but falsely pious, drunkard uncle.

This section of the story is crucial, both structurally and thematically, because it immerses the reader in a more conventional Puritan household — where fears of God and disease determine so much of the way days are spent — and presents this alternative way of life from the young Sarah’s idealized perspective. When the girls are thrust back into their mother’s care, the reader feels as uncertain and unsteady as they do. Did you do much research, or mostly rely on instinct, in differentiating these households?

What a lot people are accustomed to imagining about Puritans, I believe, is a result of the idealized and romanticised influence of the Victorian ideal; the prim and proper settlers of New England who were industrious, God-fearing and righteous. And they were these things, but they were also, according to the local records, contentious and libelous, full of supersitious dread and malicious gossip. The biggest surprise for me in doing the research was in realizing that the Puritans in character were closer to the Elizabethans than the Victorians.

From this stew of religious repression, fear of the native people, and their mistrust and intolerance of their own neighbors, I built up the two families, the Carriers and the Toothakers. In contrasting the day to day life of these separate and distinct families, I hoped to reveal Sarah’s growing understanding of the harsh and difficult life into which she was born.
At the end of the novel, Sarah learns a secret about her father. I was surprised by this plot twist and am still digesting it. Did you know his background from the beginning? Is it, like Martha’s, based in fact? And is this the set-up for a sequel?

Thomas Carrier according to family legends was over 7 feet tall, died at 109 years old, and fought for Cromwell’s army during the English Civil War. Ben Franklin’s paper “Poor Richard” reported in 1735 that two coffins has to be fit together to bury Thomas as he was so tall. These, and other legends about the patriarch, were told with as much enthusiasm as the stories of Martha. I am currently at work on the second novel, which is a prequel to “The Heretic’s Daughter, and it explores the life of Thomas and his involvement in Cromwell’s army and the execution of King Charles I of England .
It’s amazing that these legends have been handed down intact through the generations. Julie Barer, your agent and a friend of mine, told me that the girls in your family weren’t allowed to dress up as witches for Halloween because the awareness of Martha’s persecution was ever-present. Do I have that right?

As my mother made most of my Halloween costumes, she had the final word on what I got to wear. It’s not that she forbade me, or was humorless about it, but she actively discouraged it. She felt it trivialized the suffering of innocents and promoted stereotypes of the Salem witches as evil Devil worshippers.
A principled and well-reasoned objection. (At my house there was no Halloween, only “Hallelujah.”) Many thanks, Kathleen.