“In 2008, the world will be blessed,” the new McCain campaign ad begins. “They will call him The One.”

“I love this!” said a friend and Obama supporter who forwarded it to me in email last Thursday. Since then the reaction online, even from some conservatives, has been largely amused befuddlement.

But the ad isn’t targeted to you or me. It is designed to galvanize a very specific group: Evangelical Christians of the End Times, Rapture–Ready variety. It is designed, more to the point, to scare the shit out of these people by insinuating that Barack Obama is the Antichrist.

This is a particularly nefarious and crafty argument to make because it is the one context in which all the candidate’s strengths — his smarts, his articulateness, his contagious smile and way with people — can become evidence against him. All these traits are associated in the Bible with the charismatic, popular, well-spoken man who is supposed to become the leader of the world and bring about the Tribulation.

The usual suspects are making the association more explicitly. Max just pointed me to remarks from popular fundamentalist author and self-proclaimed Biblical prophet Hal Lindsey, who stops short of calling Obama the Antichrist — that would concede a loss for McCain, after all — but claims Obama is paving the way for the anti-messiah.

Yes, I know: It’s not as if the fundies were going to vote for Obama, or any Democrat, anyway. But these people don’t like McCain and have been threatening to stay home on election day, and it’s impossible to overestimate Lindsey’s ability to get them out to the polls. His The Late Great Planet Earth was probably the biggest seller at Christian bookstores — like the ones run by my mother and Max’s grandparents — throughout the ’70s and ’80s.

Ever since Obama announced his bid for the presidency, I’ve been waiting for one of these guys to start the Antichrist drum-beating — and for McCain to endorse the message subtly.

Not to suggest that the arguments are particularly candidate-specific. If Hillary Clinton had been the nominee, they would have made some version of this ad to fit her.

Addenda: Scott McLemee reminds me of an important character in the Antichrist saga: The One who prepares the way for him, much as John the Baptist did for Jesus. So maybe that’s who Obama is supposed to be, according to Hal Lindsey.

Also, Snopes.com collected an “Obama is the Antichrist” email rumor back in March. Finally, Vondelpark notes that RedState.com is keeping it classy. Here’s one of the site’s new t-shirt options, posted last Wednesday: 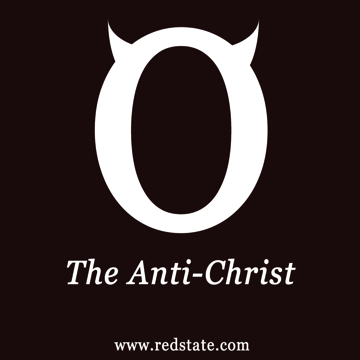