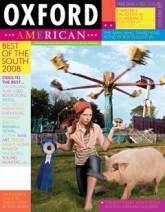 Fellow Big Star fans, take note: Oxford American’s second Best of the South DVD includes snippets of Thank You Friends, a silent 16mm film shot by Chris Bell and Andy Hummel while the band was recording #1 Record. Interesting stuff. (The rest of the footage is due out in a Rhino box set later this year.)

But for me the highlight of the 2008 best-of issue is Sean Rowe’s “An Insider’s Guide to Jailhouse Cuisine.”

I’ve been dragging my feet on this post. I want to introduce Rowe’s essay in such a way as to preemptively rebut those who would join the critics in my head in dismissing it as flippant and rambling and unnecessarily macho, but that seems a little crazy, and also, people are entitled to their (wrong) opinions. So here’s a long excerpt from the beginning:

I like to get in fights. I like to drink and drive. I like to kick the windows out of cop cars and talk shit to humorless magistrates. In my spare time I enjoy harpsichord music, quiet walks in the woods, and fine dining. Lately, though, I have been dining in, at the Wake County Public Safety Center, also known as: jail.

The Wake County Public Safety Center is a big, ugly building in downtown Raleigh, North Carolina. On the ninth floor, where I spent a month in solitary confinement, the windows are painted black so that you, the law-abiding citizen, don’t have to see what is going on inside. Good for you! But this means that if you’re inside, which you aren’t, we are, you can’t see outside. You cannot see the sky. You cannot see the grass or trees or hot women. You can see the marquee news crawl on the Channel 11 building across the street, if you squint through a slit my friend Jamaica scraped in the paint with a contraband razor blade.

Outside, you are safe, more or less. Again, good for you; or, as we say in the big house, Fuck you, motherfucker. Inside, well… let’s just say one is more or less safe, but the emphasis is on less. Look at your life-insurance policy. There in the fine print on page nine, the part I bet you haven’t read, you will see that your coverage evaporates the moment you step inside the pokey. But isn’t safety a relative concept?

Jail is a great place to score drugs, get gang-raped, or plot a revenge killing. It’s a great place to catch up on your reading or watch a Dolphins game, assuming you’re willing to throw a dictionary at the three-hundred-pound mongoloid who decides it would be better to watch the Cartoon Network. Donnie Harrison, the Wake County Sheriff, says there are about thirteen hundred inmaes in his jail on any given day. This is teensy, even weensy, compared to L.A. County, where I have also spent time, but that is another story. A small portion of the Wake County prisoner population consists of actual, dangerous criminals. Another portion is made up of people who are psychotic. Not psychotic in some cutesy, figurative sense, but in the literal, DSM-IV, eat-your-own-vomit sense; in the let’s-shiv-a-guard, let’s-scream-all-night sense. Mostly, though, jail is full of people just like you and me — scratch that, like you — who have run afoul of America’s goofy dope laws or stolen their pedophile stepfather’s credit card and tried to split to Costa Rica or bounced a check at Wal-Mart and then gotten pulled over for running a stop sign three months later and busted on a bench warrant they didn’t even know they had. These people are different from you in only one key respect: they are young, black, and poor.

But I am not here to whine about the criminal “justice” system or regale you with tall tales of life in stir. Let us dwell on a lighter subject: jailhouse cuisine. During my latest incarceration, I had the pleasure of sharing Thanksgiving dinner with Mack (trafficking), Nate (counterfeiting), Outlaw (parole violation), and J.C. (conspiracy). By then I was out of solitary and had taken up lodgings at the jail annex on the edge of town. Imagine a sparkling-new airport terminal where your plane never lands or departs….

If you laughed your ass off while reading this, be sure to track down the whole thing. If you didn’t, good for you! Or, as we now say in the Maud household, Fuck you, motherfucker.

But back to Oxford American. At Paper Cuts, Dwight Garner admires Bronwen Dickey’s essay, from the same issue, on the river “made famous — and nearly destroyed — by the success of the film version of [her father] James Dickey’s novel ‘Deliverance.'”

If you’d like a year’s Oxford American subscription, including this issue, and you haven’t won one of my giveaways in the past, email me at maud [at] maudnewton [dot] com before noon EST tomorrow (7/31), with “Best of the South” in the subject line. All entries will be assigned numbers based on the order received, and the randomizer will choose a winner. The randomizer points to Andrea Kleine.

Blown the doors off Jesus Christ

Next Hynes to be edited by Arthur