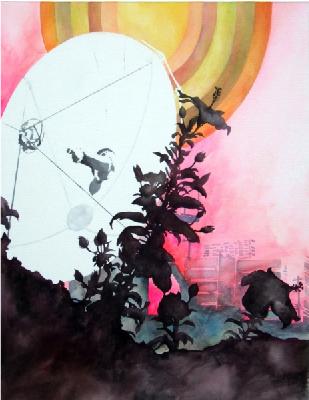 In my friend Susan Maddux’s gorgeous Hawaii watercolors, nature and technology cohabitate so convincingly, you can almost feel the heat radiating off the satellite dish.

I haven’t been back to South Florida in several years, but so much of my novel takes place there, I can’t get enough of the sensory associations these paintings inspire. No matter what drab square of concrete you’re standing on in Miami, you’re always aware that the imposed order is precarious. Tree roots wreck buildings, roof tiles become terra cotta grenades, parking lots flood so quickly that you might exit a dental appointment to find your car submerged like a rhinoceros. (Susan Orlean made similar observations far more eloquently in The Orchid Thief.)

Despite the mountains, no image in recent memory has conjured up my childhood more fully than the phone pole, barbed wire, palm tree, and small, downtrodden woman all backlit against a pinwheel sun in the painting below. 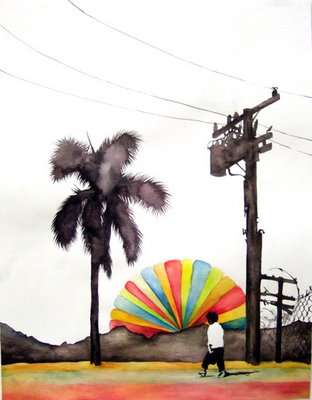 A few days ago I discovered a recent interview in which Susan discusses, as the questioner puts it, the “relationship between man and man made artifacts and the natural world.” She says:

in Hawaii the natural and the unnatural are so close together that there’s a forced interaction, an interdependency even. The myth of Hawaii feeds the tourism industry that destroys everything it touches. But the myth by this point has become integral to the place, and within it there is some truth. The islands, isolated in the middle of the ocean, are an amazing microcosm. So, what is the natural world? In some cases it’s more obvious than others, but I’m interested in the grey areas.

And when asked about symbolism, she elaborates on my favorite painting:

When I use a palm tree, I really mean to talk about a palm tree. However, that palm tree has many connotations, some of which are contextual, some come from the visual information. For example, I think the black silhouette of the palm looks kind of ominous because of the quality of the painting. And when the palm tree is put face to face with an equally rendered telephone pole, then the meaning is informed by that relationship.

In between them an older lady crosses, and I always think of my own Japanese grandmother who died before I was born when I see these ladies, to me they are a reminder of my birth connection to life in Hawaii so this person is about connection to a place, about time. She crosses between the natural and the unnatural.

Between them flares a sort of rainbow-color explosion, which to me seems to represent an exuberance, like a sunrise, coming from the mountains. The figure seems oblivious to it all, lost in thought, perfectly at home. Although this was one of the first pieces I did in this series, the ideas in this painting still feel very relevant to me.

You can see more of Susan’s art at her site, and in Faesthetic’s Doomsday issue.

A conversation with Colin Marshall

J.M. Coetzee and his censors