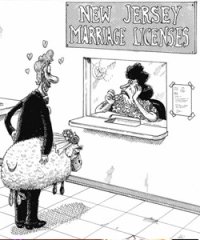 Since then, several groups and politicians have threatened challenges, the Christian Alliance Defence Fund has actually sued, and the state’s conservative party released a statement accusing the Governor of acting “without giving New Yorkers the opportunity to be heard on the issue. The party also stated that marriage in New York ‘is between a man and a woman.'”

Governor Paterson’s office wants input on whether people support recognition of same-sex couples’ out-of-state marriages. Please take 15 seconds to call his office at 1-518-474-8390. Whether it’s a machine or a person on the other end, say “I am calling to support the governor’s directive on marriage for same-sex couples.” Then give them your zip code.

Do it for all us homos who’d like to be recognized here at home!

Please call if you can. It really is quick, and you know the zealots — and anyone who got big self-righteous yuks out of this October 2006 New York Post cartoon (pictured) — will be giving their phones a workout.

On the importance of what is culled

Handwriting on your laptop