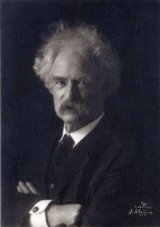 When Charles Ives’ fiancee Harmony Twichell presented her beloved to Mark Twain for approval, “Twain drew out his first overlook, finally ordering ‘Spin him around — let’s see the aft!'”

I learned this thanks to Jack Pendarvis, who idolizes Ives as passionately as I do Twain (but probably less conflictedly), and who, after our all our excited back-and-forth, said, “I think at this point we are obligated by convention to write an off-Broadway play about the encounter!”

He was kidding. But if he loves procrastination the way I love procrastination, Let’s See the Aft! could soon be coming to a church basement near you.

The excuse for this post is that, in the midst of our volley, I discovered The Mark Twain Project, a staggeringly comprehensive site put together by the Bancroft Library. It includes not just transcripts of 2300 letters, but some digitized facsimiles. Twain’s letters to Joseph Twichell, his best friend and Harmony’s father, are part of the collection.

This year the project will start to post his writings.