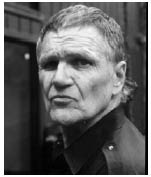 Whatever you think of Harry Crews, you’ve got to give him this: the man has never shrunk from candor. The strength and fury of his writing surges from his bluntness.

“I never wanted to be well-rounded,” he has said. “I do not admire well-rounded people nor their work. So far as I can see, nothing good in the world has ever been done by well-rounded people. The good work is done by people with jagged, broken edges, because those edges cut things and leave an imprint, a design.”
Years ago Crews published A Childhood: The Biography of a Place, an utterly unique meditation on growing up dirt poor and white in rural Georgia. Now The Georgia Review has published an excerpt from a second autobiography he’s been writing, and this one is packed with sociocultural musings — on race, women, homosexuality — that I completely reject.

Even so, I’m interested, in a way I don’t fully understand. Do I read Crews’ nonfiction because of my own background? Because I’m drawn to writing about extremes? Because I once sat in his classroom? I just don’t know. Maybe there’s a connection with some of the ideas underlying Victor LaValle’s Oe test (scroll down).
I’m posting a brief excerpt — hitchhiking tips that veer into a riff on men who prey on boys. Click “more” at your own risk.

Don’t smile. It looks fake, and if the smile was was a fake, then what was real? Never frown; it helps nothing. No expression is the best expression and the most difficult to master. No expression on a young kid who needs something badly makes him look like a whipped puppy. I didn’t like to look that way, but I didn’t have to like it, I only had to do it when it was necessary.

I knew the cars to work and the ones not to. If a man was driving and there was a woman with him, forget it. I never even tried to make eye contact when that was the case. If a woman was driving alone, not a chance. Unless, of course, you were six or seven or maybe a runty eight. I was none of those things. Besides, I already had the beginnings of a face that in later years would develop in such a way that when I walked into a bank as an adult, the guards drew their guns.

So about the best chance I had was the sort that usually picks up boys wearing washed-out bib overalls with both knees worn out. It goes without saying but I’ll say it anyway, you had to be careful with those suckers. It seemed when you were hitchhiking that men alone in pickups or cars had never heard of women and pussy. And if any one of them ever starts to talking about how much pussy he gets, or he just knows a young stud when he sees one and he bets you get a lot of gash, wait for the next red light and get out. Or if he takes a corner really slowly or has to stop for a crosswalk, bail out.

This sounds chickenshit, but if he turns off a paved road for no reason and goes down a dirt road into the woods, you might as well just give it up. The chances are on your side, if you don’t make a fuss or a fight and pretend (which at times is not all that hard to do) to like it a little by moaning and groading, that you’ll get away without a mark on you.

Jesus, I can hear the whispers and voices from here: “Crews is a fag, latent or otherwise, but still a fag. I’d never do such a thing. He’d have to kill me.”

Yeah, and he might do just that. Go look down the barrel of a gun or feel a blade on your throat and then come back and talk to me about dying being better than getting your dick sucked. I have no time for assholes who have lived under their mothers’ aprons all their lives.