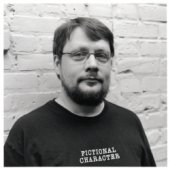 The delightful Jack Pendarvis, author of Your Body is Changing and fellow fan of Peter DeVries, lives in Oxford, Mississippi, where he’s the visiting writer-in-residence at Ole Miss. (Look for him next time you’re eating oysters at City Grocery.)

His first novel, Awesome, will be published by MacAdam Cage in July. It’s “about a happy, rich, sexy, handsome giant who goes on a scavenger hunt,” Pendarvis told SmokeLong Quarterly. “I had been bemused by the critical consensus (even in good reviews) that I write about ‘losers.’ I had been wondering a lot about what people think a ‘winner’ is. Is it a happy, rich, sexy, handsome giant? But the way I wrote him, I suppose everyone will say that he’s a loser, too.”

Below the Alabama native shares a sausage and peppers recipe inspired by Mario Batali and Goodfellas. “I am sure I make [it] the exact wrong way,” he says. “I apologize to everyone who cares!”

For the first several years of my unemployment, during which I was “finishing” my extremely ill-fated 400-page sequel to Tom Sawyer, I mainly sat around the apartment and watched TV. One thing that made me happy every single day was watching Molto Mario starring Mario Batali on the Food Network. I don’t think that show comes on anymore. But Mario Batali led me to believe that I might do exciting things with my time. He helped me come to my decision to make sausage and peppers.

I don’t believe I ever saw Mario make sausage and peppers, but I had heard them discussed in great movies like Goodfellas. I learned a general trick from Mario, though, which was to add some of the salty, foamy, carbohydratey water from your cooking pasta to your pasta sauce at the very last minute. That comes in later!

I improvised my sausage and peppers recipe based on some of the things I had seen Mario do and some things from movies. First I put some olive oil in the bottom of a nice big pot made out of something called “Magnalite.” It was my grandmother’s pot, and it’s great to cook sauce and soup in. I put the oil on about medium or medium high, and browned some (three? four?) links of spicy Italian sausage, squeezed out of their casings into the pot, in several pieces. (This was on a gas oven, which I miss. I still haven’t figured out how to judge things correctly on an electric oven.)

Then I removed the browned sausage and put in some chopped onion, chopped red bell peppers (or sometimes orange or yellow) and chopped garlic, all three chopped poorly. Sometimes I put in a whole bunch of peppers, like six. I let the onions and garlic get pretty brown, the way Mario likes them, then I dumped in a good bit of wine, as much as I could stand to dump in rather than drinking. Oh, before I dumped in the wine, I threw in a whole bunch of red pepper flakes and let them sizzle in the oil, but just for a second — not so they turned black or anything, just a heartbeat.

Now, adding the wine so early is something I never saw Mario do. He always adds the wine after the tomatoes. He would probably faint to be associated with my practice! But I seemed to recall reading in the New York Times that adding the wine first, and letting it cook WAY down (like to half the volume it was before) can give a tomato sauce a “deep, smoky flavor” (or something like that). So I let the wine cook way, way down, on a simmer. After that, I added a box of tomatoes – there are these delicious chopped Italian tomatoes that come in a box rather than a can. I threw the sausage back in, brought it to a boil for a couple of minutes and turned it down to a simmer.

Should I mention that I never salted the sauce? Sometimes I would put in a little sugar (because they do it in The Godfather). Sometimes just a tiny bit of dried basil toward the end. I was never in a big hurry to start cooking the pasta because I liked to really, really let the sauce cook down, simmering. As I had seen Mario do, I would scrape the dark, nearly burnt specks of sauce that had hopped up the side of the pot (I believe technically it might be a Dutch oven) and make sure they made it back into the sauce, all caramelized and everything. It was only after all of this that I would fill another pot with water and put it on to boil. Making the pasta so late helped me be patient with the slowly cooking sauce.

I cooked the pasta a minute or two less than instructed by the package. This is something I learned from Mario! I favored a very long curly (and expensive) pasta which is exactly wrong to have with sausage and peppers, I am sure. The reason that Mario likes to undercook the pasta in the first stage is this: You drain the pasta, turn the heat way up on your sauce, and throw the pasta in there, where it and the sauce finish cooking together. Stir, stir, stir! (I learned about the stirring from Goodfellas. I always wanted to slice the garlic with a razor blade like Paul Sorvino, but I’m too lazy.) Oh, and don’t forget, as mentioned above, right before you drain your pasta and it’s still roiling, scoop out some of the pasta water and throw it in your sauce. I always salted the pasta water pretty heavily, as Mario seemed to do (even when he called it “a pinch”). I made it almost briny. And that’s where the salt in the sauce comes from, vestigial salt was the way I liked to think of it. It made it healthier in my mind.

Of course I grated that really fancy Parmesan on top of each serving.

Once, my parents (who love my sausage and peppers) came for a visit, bringing fresh shrimp from Bayou La Batre, Alabama, my hometown. I added them to the sauce at the last possible moment (five minutes? Ten? Anyway, long enough to cook them through). It made something like jambalaya, sort of.

P.S. DON’T be tempted to stir your onions, peppers, and garlic too soon! Mario always lets them sit and cook undisturbed. I wouldn’t push them around until time to make a little swimming pool of oil for the red pepper flakes.

In his grave, Stanislaw Lem smiles