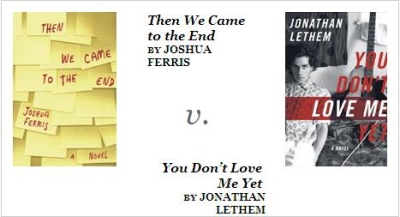 Round 2 of the 2008 Tournament of Books kicked off yesterday with my friend Mark Sarvas’ judgment. Today I choose between books by two novelists I admire, Joshua Ferris and Jonathan Lethem. Here’s how my decision opens:

Jonathan Lethem is a gifted literary thief. I mean no insult. Last year, after all, he published an essay, “The Anxiety of Influence: A Plagiarism,” in which many ideas and even actual phrases are lifted from other places and amended a little. The reader — this reader, at least — would have been unaware of the borrowing if it weren’t for the source attributions that follow the text. Bob Dylan’s art, Lethem argues in the piece:

offers a paradox: while it famously urges us not to look back, it also encodes a knowledge of past sources that might otherwise have little home in contemporary culture, like the Civil War poetry of the Confederate bard Henry Timrod, resuscitated in lyrics on Dylan’s newest record, Modern Times. Dylan’s originality and his appropriations are as one.

The same can be said of Lethem’s own best work. Motherless Brooklyn, a novel about a depressed private investigator with Tourette’s, is uniquely Lethem’s story, but unmistakably infused with the sensibility and preoccupations of noir maestro Raymond Chandler. Gun, With Occasional Music, an earlier book, also centers on a bumbling, karma-challenged outcast of a detective and takes a great deal from Chandler, but mixes in gun-packing rabbits and kangaroos straight out of Philip K. Dick’s nightmares.

Literary fiction that takes elements from genre is all the rage now, but too often it careens into the twee or the randomly fantastical or — worst of all — the ponderous. Lethem was a trailblazer in the field of modern genre-borrowing, and his footing in works like Motherless Brooklyn, Gun, and As She Climbed Across the Table is sure and surprising. These are unsettling yarns about men so out of place that their mere presence in an interaction throws the social customs of their worlds into sharp relief, highlighting their absurdity. By steeping his stories in the conventions of genre — the almost comical melancholia of noir, the concrete ominousness of sci-fi — by placing his characters in these harsh, reality-bending environments, Lethem, like the great British writer Rupert Thomson, is able to explore dark realities and emotional terrains at once strange and oddly familiar.

Yes, I know, it’s very long. You’ll have to click over to The Morning News for the rest, and to find out which book goes on to Round 3.

Also: as if teenagers have ever in human history told their friends’ moms what they actually think