Awaiting the memoir of Rupert Thomson 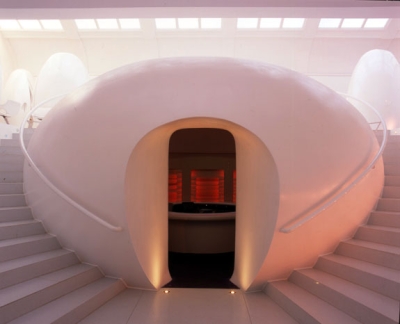 My longtime literary idol (and, more recently, my friend) Rupert Thomson is working on an autobiographical book. Iâ€™ve mentioned this already, I know. But as I pace the halls, trying not to watch the clock or pick my cuticles, I keep wondering: will his memoir be as frank, sensual and disorienting as his best novels?

And now Iâ€™ve decided: probably. Take a look at what is ostensibly a review of two high-end London bars. Who else could spend time in a place like Sketch (above) and write about it without letting his reflections on the ethos of the night out dissolve into pretention or whimsy?

There is a spaceship sunk into the floor, with two grand white staircases leading up into sheer whiteness above. A few steps down into the spaceship: it is a lounge, with a small round bar sunk further into the floor and intricate pencil illustrations covering the ceiling. Up the stairs and it gets weirder still. There is a papier mÃ¢chÃ© Dalmatian swimming in a pool. There is a French maid going about her business, dusting and offering assistance. And there are eggs. Giant, eight-foot eggs which each contain an individual toilet (there must be about twenty eggs, the room is ballroom-sized). Itâ€™s like the â€˜heavenâ€™ scene from 2001: A Space Odyssey, but all the more fantastic because, well, films are already supposed to be quite fantastic, but going to the toilet was never supposed to be like this.

Bonus link: On the Bat Segundo Show last fall, Thomson said heâ€™s relied on his novel The Five Gates of Hell to remember certain aspects of the time following his fatherâ€™s death, which is the subject of his memoir. (Scroll to 19:42.)

Image found at The Manser Practice.

Jus a gurlâ€¦ a simple one at that