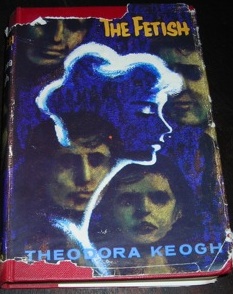 As long as we’re on the subject of strays and excessive and irrational devotion to animals: Earlier this week out-of-print expert Robert Nedelkoff alerted just about the entire blogosphere to a Telegraph obituary for the fascinating but forgotten Theodora Keogh, a novelist who happened to be the granddaughter of Theodore Roosevelt, and who once lost part of an ear to a margay (a South American wild cat) she kept as a pet at the Chelsea Hotel after her second husband left her.

She still loved cats, according to the Telegraph, when she died in obscurity early this month on 19 acres of land in North Carolina, “but gave up keeping chickens as they were eaten by coyotes.”*

At his own site Brooks Peters offers a riveting history of his initial interest in Keogh and slow falling-in-love with her work.

Then, about ten years later, I read in the New York Times that my favorite bookstore in Manhattan was closing. A Different Light, which catered to the gay and lesbian community, was shutting its doors due to a lack of business. Apparently Barnes & Noble had killed it. They were having a sale of their older gay book collection and I raced down to buy what was left. I found a copy of a novel entitled The Double Door. I was amazed to find that the author of the book was none other than Theodora Keogh. Had she written a gay novel? I was intrigued. I bought the book, raced home and read it from cover to cover. It turned out to be a very peculiar novel about a young woman who finds that her father is keeping a male lover in the townhouse next door.

The “double door” of the title is the special entrance he created so he could visit his lover in secret. The whole story had vague echoes of the infamous Wayne Lonergan case. He had been convicted of killing his cafe society wife, a young heiress who happened to be the daughter of the man who was keeping him as a sort of male gigolo. Others have claimed that Keogh was thinking more of the Marquis de Cuevas, a high society ballet enthusiast married to a Rockefeller, who allegedly kept a male lover or two on the side. Regardless of its sources, the story intrigued me. The Double Door was written in 1950, long before gay novels became the vogue. Theodora Keogh was a generation ahead of her time. It is a book that is mysterious, mystifying and completely original.

Somebody fire up the presses and get these books back into print.

* If I listen hard enough, I think I can hear Mr. Orthofer gently clearing his throat on the other side of the city — and it’s true, none of these biographical details speak to the quality of Keogh’s writing. But I’m always drawn to stories of excessive and irrational devotion to animals. Beyond all the dogs and cats and parrots of my childhood, I remember wrestling with a baby mountain lion, day after sad pet store day (my mom wanted the cat, but my dad drew the line at wild animals), until my arms were peppered with bites and streaked with scratches. And sometime I’ll have to tell y’all about “Joshua Chicken,” the blue rooster that lived in my shower.

Notes on the alleged decline of reading