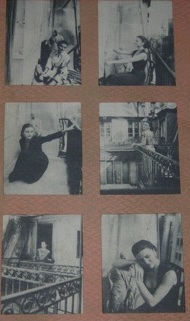 After reading Theodora Keogh’s obituary, I had to track down a copy of her out-of-print 1950 novel, The Double Door, which centers in part on a father’s affair with a young man who becomes his daughter’s lover.

The Telegraph says the book was “inspired by the Marquis de Cuevas, who ran his own ballet on his wife’s Rockefeller money and had two adjoining houses in New York, in one of which they entertained grandly. But an internal door led into the neighbouring house, where unspeakable things took place.”

Brooks Peters isn’t so sure about inspirations; he calls the book a “very peculiar novel about a young woman who finds that her father is keeping a male lover in the townhouse next door.” Here’s how it opens:

The young man with the wheelbarrow turned down Sixty-fifth Street. It was in that brief interval between dusk and dark and in the uncertain light things were disproportionate. One could no longer judge distances. The thick dusk seemed to come not wholly between the eye and its object but between the ear and its reverberation. The young man’s wheelbarrow became a thing of magic: it glowed with half a dozen crimson lights as though giant fireflies had settled on it. The young man was wheeling danger signals to an opening that had just been made in the surface of the street. He crossed an avenue, debonair and at ease. His place here was secure, his destination important. He settled the red lanterns carelessly, in case anyone was looking, and accurately, because he was conscientious, and then walked off into the night.

The street, nursing its fresh and gaping wound, was silent.

It was a district of private houses, more and more of a rarity in central New York. Big business hovered; not so far away, the monster shadow of Rockefeller Center was stretching its claws, but here, in Sixty-fifth Street the skies were as yet unpierced.

In No. 7 only one window was lit up, like a dirty yellow eye, at the very top. No. 5, however, was clear-eyed; the light from there streamed out into the street in white rectangles. There would really have been no need for the little red lanterns. No. 5 and No. 7, side by side, touching shoulder and flank, looked as different as could be: born at different times, one would have sworn, and from different parents. Yet they were joined. An artery as heavy and brutal as that which binds Siamese twins ran through them both. Their bloods met in it and fought and were sickened. This artery, this freak passageway, was through the Duke Charles de Tudelos’ bedroom. Here there was a double door which he often used and which other people used too. The Duke found it quite natural that two houses should belong to him. He was immensely rich, or rather his wife was. If he needed two houses to express his personality, he had the right to own them.

At this instant he was coming through from No. 7 to No. 5. The double door was always open. Sometimes, especially of late, his wife Sheila would stand there for minutes on end, looking down the dark old-fashioned halls of her husband’s other home. She would not go in, however. He could count on that.

Images above are of Keogh herself. They appeared on The Double Door dust jacket, reproduced at Peters’ site.

Don B.: In no need of special pleading