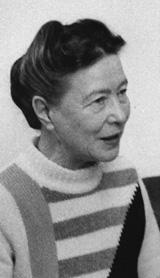 As the centenary of Simone de Beauvoir’s birth draws nigh, English-speaking readers still don’t have access to an accurate translation of The Second Sex.

At least Jonathan Cape intends to publish one; it’s in the works. (Little thanks to Knopf, which reportedly accepted the project in 2000 but became “so fed up with feminists saying how terrible the translation was” that it effectively shelved the whole thing without telling anyone.)

So, for now, no, ladies: the seminal text of modern-day feminism isn’t available. But if you’d like to read about Beauvoir’s sex life, you’re in luck!

Imagine I said that last sentence with only half an eye-roll — because I have to admit, I really am fascinated by her sexual escapades and compromises.

Like Marguerite Duras, Beauvoir is etched in my mind as a voracious woman of fifty. And arguably, as Stephany says, her “sex life was an important part of her work — she and Sartre were attempting to create a new kind of relationship between men and women.”

When I look back on everything I read in women’s studies classes — from revolutionary texts like The Dialectic of Sex, to the essentialist likes of This Sex Which Is Not One and The Laugh of the Medusa — I’d most like to revisit Beauvoir’s autobiography.

At Crooked House, Stephany has been posting excerpts from the first volume, Memoirs of a Dutiful Daughter. Here’s a little bit on de Beauvior’s childhood love for Little Women:

[T]he thing that delighted me most of all was the marked partiality which Louisa Alcott manifested for Jo. As I have said, I detested the sort of grown-up condescension which lumped all children under the same heading. The defects and qualities which authors gave their young heroines usually seemed to be inconsequential accidents; when they grew up they would all be as good as gold: moreover it was only their personal morality that distinguished one from another, never their intelligence; it was almost as if from this point of view their age had made them all equal. But in Little Women Jo was superior to her sisters, who were either more virtuous or more beautiful than she, because of her passion for knowledge and the vigour of her thinking; her superiority was as outstanding as that of certain adults and guaranteed that she would have an unusual life: she was marked by fate.