Below novelist Jami Attenberg talks with Kate Christensen about unexpected convergences in their most recent books. You can meet Attenberg (pictured below) tonight at Barnes & Noble Chelsea, at an event for The Kept Man, which I read over the holidays. And as long as we’re on the subject of kept men and great men, here’s Attenberg on dirty old men, too. 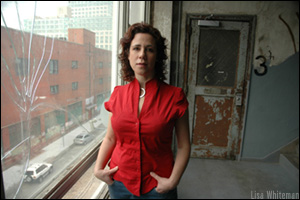 It goes without saying that The Great Man is one of my favorite books of last year — you will not find this kind of sharp, funny dialogue, or female characters this robust, in many other books, and Kate writes about food with the lust of a starving young Frenchman. I was thrilled when she agreed to chat with me about emotionally absent men, the potency of unlikable characters, and the charm of the North Brooklyn waterfront.

JA: You would think our books are about men from the titles, but the men are so actively absent. Oscar is dead in your book, and Martin is in a coma in mine. And let’s face it, even when they were alive, they were both emotionally absent in their ways. Why are women attracted to this kind of man?

KC: It’s very strange that both our The Something Man-titled novels are about the struggles of women to come out from under the figurative wings of the famous but absent male painters they’re associated with. I could easily see being attracted to Martin, the painter in The Kept Man, and I completely understood why Jarvis, your heroine, found it very hard to move on when he had his accident. Not only was he devoted, sexy, and successful, he also gave her the stability she didn’t have before they met, back when she was a wild party girl. He became her home, emotionally speaking; underlying your novel’s story is her struggle to forge her own solitary identity.

One of the interesting things for me about writing The Great Man is that I didn’t like Oscar; I’m never interested in or attracted to men like him, total narcissists who expect women to coddle their egos. I liked the women who loved him, and unconsciously I wanted all of them to get their own lives together and not live vicariously through this needy, demanding, charismatic, selfish man. I have a feeling you felt quite differently about Martin; did you?

JA: I would have wanted to know Oscar, which is often half the battle in life (and definitely the whole battle in a novel.) Martin I found very attractive but also entirely ruinous. I think he might have ultimately devastated Jarvis one way or another. And Jarvis is “kept” in her way, as well, obviously, before and after his accident.

Practically every character in my book is held back in one way or another. That said, Martin is definitely a seductive character. It may have something to do with him being held in Jarvis’s memory in his prime. Whereas Oscar is an old man in my reading of your book. But he had something to say, that man. And if these vibrant, sexy older characters in your book loved him, than that made me love him a little bit too.

I think there are a lot of these articulate, charismatic, scruffy artist types out here in North Brooklyn. Today was the first snow of the season and when I went out earlier I saw a few of them trudging in the snow by the East River, with their long striped scarves, mismatched wool hats and pea coats. At least I imagined they were interesting artists. You and I live about a mile away from each other down the waterfront. Is there something about writing on the waterfront that is particularly inspiring for you?

KC: Thanks for sticking up for ole Oscar! I think one reason he was so insufferable is that no one ever really stood up to him. Something about that sort of spoiled brat must appeal to me on some level, because, come to think of it, all my novels are built around a character with too much power: Jackie, Ted, Dennis, and Oscar. I think they all serve as the energy-generating foils for my protagonists to react to and deal with, the irritating grains of sand that cause the pearl to be made. The novel I’m working on now has one, too. So it looks like I needed Oscar just as much as those old ladies did.

I was also thinking that the words “great” and “kept,” respectively, take on some complex and possibly ironic meanings in the course of both of these novels.

The waterfront has, in addition to those interesting-looking characters wandering along it, an equally interesting history that exists still in the form of beautiful old warehouses, buried train tracks leading down to the old shipyards, and street names like Java and India. Teddy in The Great Man moved into this neighborhood when it was very rough, back in the late 50s; she was the daughter of a millionaire English financier who lost everything, and she dropped out of Vassar and reinvented herself as a single mother, a secretary living in this immigrant waterfront community in a brick row house on Calyer Street, which happens to be the same house I live in. The imagination works a little differently, setting a story in a familiar place as opposed to a made-up one; it’s necessary to reinvent the familiar.

The Kept Man really gets at the essence of Williamsburg, so much so that in a way, for me, the authenticity of your imagined Williamsburg starts to supersede the Williamsburg I know so well, which is no mean feat. I know that laundromat, the donut shop, the Greenpoint Tavern, and they are and yet aren’t the places in your novel; I was blown away by the way you were able to both capture and transform them. How much of this place itself was the impetus for the novel?

JA: The first time I ever visited Brooklyn was about ten years ago, I actually came to a party in the very building I live in now. (I’ve lived here for about five years.) And it couldn’t have been any more raw or industrial or wild at that time, and I instantly fell in love with it. So in a sense this novel has been building up for ten years, whether I was aware of it or not. And after I moved here I met a lot of creative people who waxed poetic about the way the neighborhood has changed and I was always so captivated by them and their stories. There’s plenty of nonsense that has been written about this neighborhood — all those crazy young kids that live up by the L station — but to me Williamsburg, and in particular the waterfront community which is far different than the rest of it, is defined as much by its past as it is by present. Which I guess is something I would say about Jarvis, and definitely your brilliant characters. All of these women are trying to find a way to forget about the past so they can move forward. I suppose that’s a long way of saying that to me, Williamsburg is another character in the novel. Ghosts and all.

KC: There’s a scene in your novel that illustrates this perfectly… Jarvis is riding through the neighborhood with a car service driver who seems iconic to me, symbolic in a visceral literary way, the kind of character I think of as the “angel” archetype — but she also seems like a real person. In fact, I feel like I know her and have ridden in her car before, twice, both times with my dog, because she has a dog and when you call to request a ride for yourself and a dog, she’s the one who shows up. She exactly fits the description of Missy in The Kept Man, and I almost don’t want to know whether or not it’s really the same woman. The point is that now that I’ve read The Kept Man, it is the same woman. It’s like a dream that’s so real you can’t remember whether it happened or not. So Missy exists now for me in this part of the world; maybe she’s a ghost, maybe not.

My idea for one of your comic books

Rx for when The Wire ends