The Elegant Variation’s Mark Sarvas is my pal and writing partner — even now, with his novel due out in May, he checks in on my progress every couple days — so I can’t pretend to be objective about Harry, Revised. But I’m deeply impressed with the finished book and thrilled by the early reception.

Below Sarvas shares a favorite childhood recipe that incited mockery in elementary school. And don’t miss his recent post on the sophistry of Christopher Hitchens. 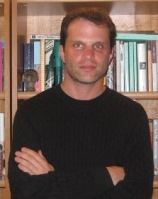 Körözött is a staple of any Hungarian kitchen and is basically a cheese spread, something consumed on toast, crackers, bagels or your carb of choice. As with egg salad, however, that’s about all anyone agrees on. There are just about as many permutations of körözött recipes as there are Hungarians. And they all feel very strongly about their individual interpretations. (When I mentioned this post to a Hungarian friend, I was admonished to dump my recipe and replace it with his, which calls for soft feta cheese. A nauseating proposition.)

It’s also, frankly, a somewhat unappetizing looking little hors d’oeuvre — the paprika gives it a bright orange color and the cream cheese gives it a mushy consistency — and so it brought me no end of grief as a child when it found its way into my lunch sandwiches. My fellow fifth graders were predictably grossed out at the sight of it, and one anointed it “Wild Ape Shit,” which saddled me with an unpleasant mental image that has lingered ever since.

But no amount of teasing could make me forsake the stuff, which remains a guilty pleasure to this day. I make it for parties and share it with friends, and when they ask what’s in it, I tell them “Honestly, you’re better off not knowing. Just try it.” And they do, and they all go away converts.

So here’s the Sarvas family recipe, which my mother, in true Hungarian fashion, modified from my grandmother’s recipe, which used to include mustard and capers. I urge you to overlook the oddity of the ingredients and just try the combination. The sum of the parts and all that.

Find yourself a large mixing bowl. Add an entire package of Philadelphia Low Fat Cream Cheese, the kind that comes in a box, not a tub. (I’m not brand particular, it’s just the rightamount for this recipe.) Follow that with one stick of margarine. (Again, sticks not tubs.) Not butter. Sacrilegious, I know, but just bear with me. Finely dice a quarter of a small onion and throw it in. Next, take a beef bouillon cube and grind it to a powder and add that (or the equivalent amount of powered bouillon) to the mix.

The next part is necessarily imprecise because that’s what happens when my mother shares a recipe. You’ll need a tube of anchovy paste. Then add what she calls (imagine an eastern European accent) “six toothpastes of anchovy paste.” You can go a little lighter if you like — you can always add more later. Finally, you need some ground Hungarian red paprika. Sprinkle it on liberally but remember it’s mainly for color and a light paprika taste. If you add too much, the spread will taste too sweet. 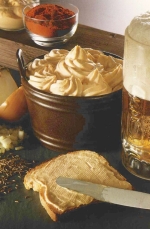 Then just grab a fork and begin to work the whole thing — it takes time, persistence and good forearm muscles — until it becomes an evenly blended orange whole. It should ideally look something like this:

I know… but trust me. Put it on toast, an english muffin or fresh bagel — something warm is best. You’ll love it and maybe even end up giving it your own personal twist in true Hungarian fashion: Caraway seeds? Chives? Just don’t give it to your kids for their school lunches.

Not so much satirical as sharply observed