Laila Lalami is a precise thinker and essayist, an equally precise fiction writer, a veteran blogger, and a longtime friend. Her first book, Hope and Other Dangerous Pursuits, has been praised by Junot Díaz, Diana Abu-Jaber, and many others. Earlier this year, Panjak Mishra admired Hope in the NYRB, lauding Lalami’s “calm sympathy,” the “evenhandedness [that] offers us no scope for easy judgments.”

In the current Nation, Lalami contributes a cogent review of historian Joan Wallach Scott’s The Politics of the Veil. And at Words Without Borders this month, she leads a book group discussion of Camara Laye’s The Radiance of the King. Below Lalami gives us her favorite — and, in fact, only — recipe (which sounds like heaven to this cubicle-bound head-cold-sufferer). 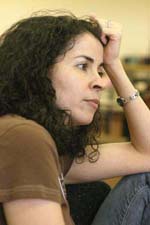 I have to confess I have been barred by my husband from ever doing anything in the kitchen except eat in it or maybe wash dishes. I can’t cook. I tried to make rice two years ago, and when Alex came home he found the calcified remains of the rice at the bottom of a plastic pot. I decided to make a cheese omelette for dinner on one of the last nights in Portland before our move, and I mixed four kinds of cheeses and put in too much salt. It was, needless to say, inedible, though my father, who was helping us pack, bravely soldiered on.

There is one concoction I can make, though. (I think I would be disowned if I couldn’t.) It’s an infusion, actually — Moroccan mint tea.

Boil water in a kettle. Pour a little hot water in a tea pot to warm it up, then pour it out. Put in a rounded tablespoon of Chinese gun-powder green tea, then add a full handful of fresh mint. Add sugar to taste. (Most Moroccans like their mint tea extra sweet and would use about five tablespoons of sugar in a mid-size tea pot.)

Add boiling water, gently stir, and then let sit for about five minutes before serving (in a small glass, never in a cup.) If you like your tea pretty strong (i.e. Sahrawi style) place the tea pot directly on a very light fire and wait until foam forms at the top, then remove from the stove and serve. That’s about it.

This infusion is perfect with holiday cookies, or alone. I haven’t yet managed to screw this one up, and if I can make it, then, really, anyone can.

Gawker schadenfreude of a personal variety