James Hynes — whom Chris Lehmann has called “a pioneer of genre-bending fiction” — is one of a handful of novelists whose books Max and I enjoy equally. He’s also an unselfish man. When we were in Austin earlier this year, Hynes not only met us for dinner but offered to drive our rental-carless asses home from the restaurant.

Recently he’s raved about Scott Westerfeld’s Extras in the NYTBR, started a blog, and posted a previously unpublished ghost story. And below he divulges his spaghetti sauce recipe. 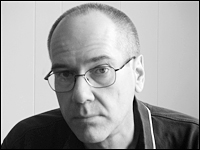 About four years ago, I lost 90 pounds, so I don’t cook a lot of what I used to cook anymore. Not that I was ever much of a cook to begin with; I knew how to fry a hamburger and boil hot dogs, basically. These days I open a lot of bags of salad and eat lots of chicken and turkey. Now and then I still make one of the old dishes, and this is one of them, which would probably serve, say, four or five people for one meal, or one middle-aged bachelor for a week. It’s not fancy, it’s not authentic, it’s not even particularly original, it’s just one of the few dishes I know how to make without consulting a cookbook. It’s just plain old Midwestern spaghetti sauce.

First you dice a whole onion and a lot of garlic; I usually do at least four, and sometimes six cloves. I like a spicy sauce. Sauté them in oil in a cast iron pan until they’re golden brown, then add a pound or a pound and a half of hamburger. If I’m being calorie conscious, I use really lean meat or ground turkey breast, but meat with more fat in it holds the flavor better for some reason. Cook the meat and the onion and garlic together until the meat is done.

While you’re waiting for the meat to cook, empty one 28 ounce and one 14 ounce can of peeled whole tomatoes into a big pot. I can’t remember why I started doing two cans of different sizes; perhaps it was because my eyes were still watering from the onions and I couldn’t see what I was doing, but at any rate, it’s traditional now. Add one 12 ounce can of tomato paste, then fill up the empty tomato paste can with water once and maybe twice and add that, too. You might also want to kind of hack up the whole tomatoes with a knife in the pot (which probably explains why my knives are all so dull). Stir it all together and start the heat under the pot.

By now the meat is ready, so pour off the fat and add the meat to the sauce. Then add 2 teaspoons of oregano, 2 teaspoons of basil, a teaspoon of sugar, a teaspoon of dry mustard (or a tablespoon of French’s), and a half-teaspoon of pepper. I don’t add salt, because I’m hypertensive, but feel free. Sometimes, in the past, I used to add a little Worcestershire sauce, and sometimes a couple shakes of Tabasco sauce, but these days I usually throw in some of those dried red pizza peppers. Bring the meat sauce to a boil, then reduce heat and simmer for at least half an hour. Add a bay leaf in the last ten minutes, though with all that onion, garlic, oregano, basil, Tabasco sauce, and pepper, you may not even notice it.

That’s it. Serve over pasta (though it’s not too bad on a baked potato, too), with parmesan.

Thomas Clancy through a stained-glass window