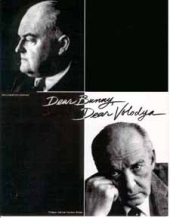 Longtime readers know that I’m endlessly entertained by the bilaterally condescending friendship that sprang up between Edmund Wilson and Vladimir Nabokov in the mid-1900s.

Reading Wilson’s Literary Essays and Reviews of the 1930s & 40s, I was amused to discover a review — dated September 9, 1944 — excoriating Nabokov’s puns. (The book under consideration is Nabokov’s study of Nikolai Gogol.)

The reader is also annoyed by the frequent self-indulgence of the author in poses, perversities and vanities that sound as if he had brought them away from the St. Petersburg of the early nineteen-hundreds and piously preserved them in exile; and, along with them, a kind of snapping and snarling on principle at everything connected with the Russian Revolution that sometimes throws the baby out with the blood bath — to be guilty of a species of witticism to which Mr. Nabokov is much addicted and which tends, also, a little to disfigure his book. His puns are particularly awful. In writing English, he has not yet acquired the sense of how horribly “the government specter” and “Gogol’s spa’s were not really spatial” are calculated to grate on English-speaking readers.

This appeared nearly four years after Wilson urged Nabokov, in a private letter complimenting a New Republic review: Ã¢â‚¬Å“do please refrain from puns, to which I see you have a slight propensity. They are pretty much excluded from serious journalism here.Ã¢â‚¬Â

For more Wilson/Nabokov correspondence, see Three responses to Lolita, and especially the (very public) Eugene Onegin exchanges (“I greatly regret,” writes Nabokov, “that Mr. Wilson did not consult me about his perplexities … instead of lurching into print in such a state of glossological disarray”).