As far as I can tell, some twenty-odd years after the events of Eudora Welty’s Delta Wedding, and about eight years before the novel appeared, my great-grandfather was hired to manage the plantation Welty fictionalized in it.

The book is set in September 1923, at Shellmound, just north of Greenwood, Mississippi. Very little happens in Delta Wedding, and apparently that was intentional. “The Delta enclave was, [the author] told Charles Bunting, ‘all such a fragile, temporary thing…. At least I hope it was. That’s why I searched so hard to find the year in which that could be most evident.'”

The book is probably my least favorite of Welty’s, but its insights into the pretensions of cotton gentility are considerable. The wedding of the title is of the plantation owner’s daughter to the young man who manages the plantation. Her family is not exactly over the moon about the match.

“Mama, I think it’s so tacky the way Troy comes in from the side door,” said Shelley [another daughter] all at once. “It’s like somebody just walks in the house from the fields and marries Dabney.”….

“Well, one thing,” said Tempe [an aunt] in a low voice to Shelley, … with a sigh of finality, “when people marry beneath them, it’s the woman that determines what comes. It’s the woman that coarsens the man. The man doesn’t really do much to the woman, I’ve observed.” This week’s photos are of my great aunt and grandmother. I believe they’re in the fields at Shellmound. 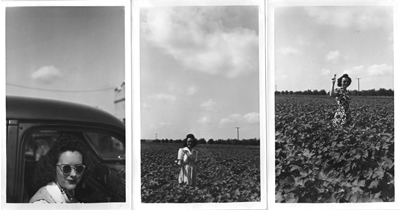 Where the Wild Things Are, a novel by Dave Eggers?