On rereading Kafka’s The Trial 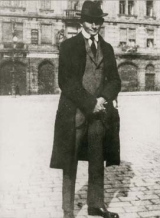 “Someone must have slandered Joseph K., for one morning, without having done anything truly wrong, he was arrested.”

So begins Franz Kafka’s The Trial, a book as melancholy and claustrophobic as it is funny, and one that only seems more mordantly insightful to me with each reading.

A friend who thinks The Trial is a legalese-ridden mess blames my legal background for the fascination, but I’ve always been drawn to stories that explore the soullessness of rules, and the often counter-intuitive demands of bureaucracy. (It’s a preoccupation I share with the Brazil-and-brutalist-architecture-obsessed Max.)

The parable of the doorkeeper alone guarantees that my Kafka flame will burn eternally.

Anyway, I’m finally getting around to the Breon Mitchell translation, which is worth picking up if that’s not the one you cut your teeth on. Here’s a small excerpt from Mitchell’s preface:

The translator’s trial begins with the first sentence, in part because the hint of uncertainty so subtly introduced by the subjunctive verb “hätte[n]” is inevitably lost in the standard translation, even with E.M. Butler’s later revisions: “Someone must have been telling lies about Joseph K., for without having done anything wrong he was arrested one fine morning.” Although in this version it is by no means clear why Joseph K. has been arrested, there is no doubt about his innocence. The mere presence of the German subjunctive, however, tends to undermine this reading even as it asserts it…. [T]he standard English translation declares K.’s innocence too simply.