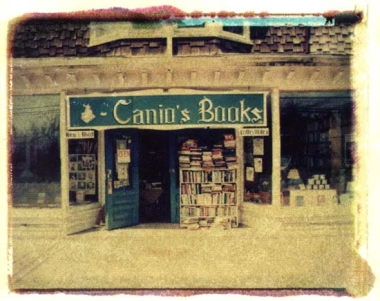 Canio’s Books, in the former whaling village of Sag Harbor, on the East End of Long Island, is starting to come into its best season, autumn. The busy summer folks have gone, and there is a quiet golden light in the village and the leisure to settle and browse.

Canio’s has a complete wall full of poetry books, a table of the best new literary novels and nonfiction, shelves of used books to discover, and expert advice from whoever is watching the shop that day. There are lots of “local authors” on the shelves; Sag Harbor, founded in 1789, has been home to James Fenimore Cooper, Herman Melville, John Steinbeck, E.L. Doctorow, Spalding Gray, Tom Harris, and Ursula Hegi.

Canio’s was started in 1980 by Canio Pavone, a Spanish and Japanese language teacher. Almost at once the shop became a literary hub. A reading series started in May 1981 with Nelson Algren, the brawling Chicagoan who spent his last days in Sag Harbor living across the street from Betty Friedan. Algren attracted such a crowd that Canio had to borrow folding chairs from the Sag Harbor funeral home. In those early days there were all-night readings of Moby-Dick.

In 1999, when Canio retired, expecting to shut down the shop, there was an outpouring of protest and Canio’s was saved. New owners Maryann Calendrille, a writer and teacher, and Kathryn Szoka, a photographer whose “Vanished Landscape” series is in permanent residence at the Canio’s online gallery, keep the bookshop going in the spirit of the founder, with personalized book ordering (new, used, antiquarian), Saturday night readings and book launches, and Sunday afternoon gallery openings. There are also writing workshops, concerts, and occasional special events. I organized a fundraiser for New Orleans writers several months after Katrina; a dozen poets, artists, and fiction writers read at Canio’s, and some 60 people retired to the deck of my house afterward for red beans and rice prepared by a Mississippi native.

But who on earth were these people?