The specter of the unanswered letter 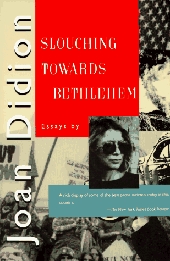 Last month I took some time away from the site to deal with various things, including eye troubles.*

While worrying about everything that was piling up — all the books I’d never get to and the email I couldn’t answer — I pulled Joan Didion’s Slouching Towards Bethlehem from the shelf and rediscovered her essay “On Self-Respect.”

Anyone trying to balance writing, a day job, and guilt issues might get something out of this part toward the end:

If we do not respect ourselves … we are peculiarly in thrall to everyone we see, curiously determined to live out — since our self-image is untenable — their false notions of us. We flatter ourselves by thinking this compulsion to please others an attractive trait: a gist for imaginative empathy, evidence of our willingness to give. Of course I will play Francesca to your Paolo, Hellen Keller to anyone’s Annie Sullivan: no expectation is too misplaced, no role too ludicrous…

It is the phenomenon sometimes called “alienation from self.” In its advanced stages, we no longer answer the telephone, because someone might want something; that we could say no without drowning in self-reproach is an idea alien to this game. Every encounter demands too much, tears the nerves, drains the will, and the specter of something so small as an unanswered letter arouses such disproportionate guilt that answering it becomes out of the question. To assign unanswered letters their proper weight, to free us from the expectations of others, to give us back to ourselves — their lies the great, the singular power of self-respect. Without it, one eventually discovers the final turn of the screw: one runs away to find oneself, and finds no one at home.

* Since then I’ve met with four doctors, all of whom said surgery was a viable option, but one of whom alerted me to some less invasive options I hadn’t known about. I’m not particularly interested in having my skull tampered with when something else might work, so for now there will be no cutting. But thanks for all your well-wishes.

In which carnal knowledge of watermelon is lacking

Ho hum from the man with the shoulder towel