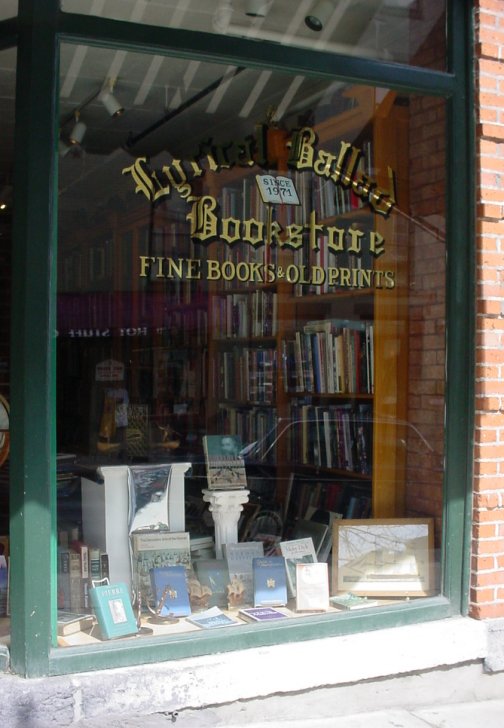 The last full week of every August, I visit Saratoga Springs, New York, with my father and a few of his friends to play the horses at the world-famous race track there. Dad’s been making the pilgrimage for nearly 40 years — this was my eighth consecutive time tagging along. Since we’re serious about making it to the track each day, I don’t spend many afternoons exploring the small, charming town, but it’s hard for me to go six days without browsing in a bookstore. For the first several years, I contented myself with a nighttime perusal of the Borders on Broadway whenever the mood struck, but last year I discovered Lyrical Ballad.

Just off Broadway, on Phila St., the used-books store is unexpectedly large. I spent my first stop-in marveling at the two front rooms that I believed composed the entire place. I bought hardcover editions of An Accidental Man by Iris Murdoch and Horse Knows the Way, a collection of stories by John O’Hara. This year, I asked one of the rotating cast of friendly people who work there (and seem to own the place) if they might have more paperback fiction in another section, and I was directed to a back room, thus discovering that Lyrical Ballad is much larger than I first thought, almost disorientingly so, room after room. The back spaces don’t have the aesthetic charm of the two in front, but they’ve got plenty of inventory.

I also learned that the building was previously a bank. One room in the back is entered through a silver gate that used to house a vault. Some of Lyrical Ballad’s more expensive and rare stock is kept there, including an old three-volume British edition of Boswell’s Life of Johnson.

Not surprisingly, given the town it calls home, the store has an extensive selection of books about horses, from how to care for your own animals to breeding encyclopedias to narratives of the sport. Near the end of this year’s trip two weeks ago, I picked up a beautiful treasury of horse racing stories published in the 1960s, including black and white photographs throughout, and a copy of Across the Board, a memoir by Toney Betts, an old racing writer for the New York Daily Mirror, inscribed by the author and published in the ’50s. The cover copy Betts’ book proclaims that it’s full of colorful characters and anecdotes about “America’s No. 1 sport.” How times have changed. But Saratoga, out of the way as it is, having played a key role in the American Revolution and showcased its race track since 1863, always has one eye on the past, so the graying but distinguished selections at Lyrical Ballad seem particularly appropriate.

At the heart of fiction’s power?