Yesterday Chris Lehmann praised D.C.’s foremost used bookstore, the nonprofit Books for America. Today Sean Carman puts in a good word for a store on the other end of the indie spectrum, the flashy Kramerbooks & Afterwords. (Before clicking that link, prepare yourself for a video complete with intro music and sales pitch.) 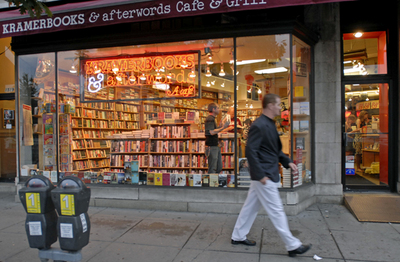 A favorite book store should probably be jammed with books — books sitting in abandoned carts, books stacked in corners and spilling into open spaces. It should have tall shelves and darkened aisles, a comfy chair hidden away somewhere, and an old soul at the cash register with nothing to do but shoot the breeze.

This doesnÃ¢â‚¬â„¢t really describe Washington, D.C.Ã¢â‚¬â„¢s Kramerbooks & Afterwords. It is a book store that is also a bar, a cafe, a meeting place, and a sometime jazz club. It is, in other words, a scene.

The key is the large, plate-glass-window storefront. In daytime it floods the store with natural light, at night it transforms KramerÃ¢â‚¬â„¢s into an urban oasis (hours are from breakfast until 1 a.m. weekdays and around the clock on weekends). You duck inside the narrow doorway and push past the check-out line into the store itself, where the walls are lined with perfectly organized shelves and the floor is filled with neatly-stacked tables.

The crowds (the store is only half a block from one of the cityÃ¢â‚¬â„¢s busiest metro stations) make browsing more of a sport than the leisure activity nature intended. You must gauge the flow, pick your spot and make your move. Everyone is young and smartly dressed. There is cool music piped in through speakers, meaning you can dart, scan, and peruse to KT Tunstall, Keren Ann, and the Brazilian Girls.

KramerÃ¢â‚¬â„¢s is like the city in which it resides: flashy on the surface but still a nerd at heart.

But unlike some of the cityÃ¢â‚¬â„¢s biggest nerds, who seem driven to madness by repressed desire (Congressman Foley and Senator Vitter, IÃ¢â‚¬â„¢m looking at you), Kramerbooks is at ease with its steamier side. The bar and cafe that lie behind the bookstore are among the most fashionable places to be seen in the District. The drinks are tasty and smooth, the deserts sinful, the espresso drinks strong and steamy. Late nights on weekends there is live jazz.

KramerÃ¢â‚¬â„¢s is so hot that Ken Starr served it with a subpoena for Monica LewinskyÃ¢â‚¬â„¢s reading list. This marked the low point of the Whitewater investigation, which had already become a moralistic witch hunt but with the subpoena became a crusade bent on wrecking everything in its path, from the will of the electorate to the independent bookstore.

But KramerÃ¢â‚¬â„¢s survived, as venerable Washington institutions always do.

I like to visit KramerÃ¢â‚¬â„¢s on weekend afternoons. ItÃ¢â‚¬â„¢s a nice walk down New Hampshire Avenue, a broad thoroughfare lined with oak trees, embassies and old mansions. After browsing I take the book IÃ¢â‚¬â„¢ve found into the bar and read its first chapters over a microbrew, or I wander down the block and sit in the park under the fountain ringed with half-robed goddesses celebrating Admiral Dupont.

There I think about how funny life is. Who remembers Ken Starr? No one, that’s who. And while he’s marooned in his private version of Hell (northern California) Bill Clinton, bless his heart, just might make it back into the White House.

It makes you think that maybe there is a God, and that she likes small bookstores and has a well-developed sense of irony.