Below Michael Gorra, a critic and Smith College English Lit professor, recalls visits to his favorite Hamburg bookshop, the Bücherstube Stolterfoht, where he yearned for every volume although (or maybe because) all but the children’s titles were beyond the reach of his German. (I haven’t found a photo for this store, so you’ll have to live with a link to its location and a random Hamburg photo. Please note that Gorra’s comments are excerpted from his The Bells in Their Silence: Travels Through Germany, published by Princeton University Press in 2004.) 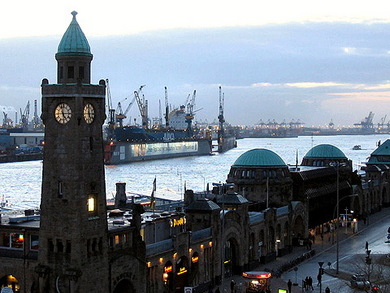 My favorite bookstore in Hamburg was a place called the Bücherstube Stolterfoht, just up the street from our apartment, a small, free-standing building almost buried in the trees by the entrance to the local U-Bahn stop.

Building? A shack, really, its walls flimsy and its roof askew, a structure whose plate-glass front made the whole shop look perilously open to the city’s steady wind and rain. But the display behind that glass seemed always attractive: new biographies of Bismark and Che; stylish paperback editions of Robert Walser and Ingeborg Bachmann; a pictorial history of Ellis Island and a boxed set of Günter Grass, including the authorÃ¢â‚¬â„¢s own reading of The Tin Drum, on twenty three CDs.

Inside there were bookcases running around the room’s three solid sides, with most of the stock double-shelved and indecipherably arranged, while the floor was so jammed with high-piled tables and revolving racks for paperbacks that gridlock started at two customers and a dog. No cash register: just an adding machine and a drawer, with receipts written out by hand. And no computer books or self-help manuals or investment guides. Fiction, poetry, a little art and music, biography, the complete works of Theodor Adorno — it was the kind of store that made me wish I could read every volume it contained.

Except I canÃ¢â‚¬â„¢t, canÃ¢â‚¬â„¢t make it through anything more than the simpler of the children’s books that line the wall by the door. The shop’s dogeared furnishings were in themselves enough to make the place charming, but the fact that it reduced me to something close to illiteracy made it irresistible.

In Germany I go into more bookstores more often and with more pleasure than I do at home, and not just because HamburgÃ¢â‚¬â„¢s are bigger and better than the ones in my small Massachusetts town. No: if I walk into every bookstore I pass, if I find them an endless temptation, if I spend so much time poking through their shelves without making a purchase that I must look like a shoplifter, itÃ¢â‚¬â„¢s precisely because I canÃ¢â‚¬â„¢t read anything.

Bookstores at home are never so teasing. Even if their stock werenÃ¢â‚¬â„¢t almost always over-familiar, the thrills they offer are all too easily accessible. A foreign language, however, is enough to turn the shop into a realm of unattainable pleasure, where mocking eyes peep out from around a curtain, and every book-lined room here seems as though it might be a fabulous lost library, like that of Alexandria or the monastery in The Name of the Rose; a cabinet of wonders that maintains its bewitching power to the exact degree that it also remains
inaccessible.

ThatÃ¢â‚¬â„¢s even true for those books that I can read, or rather those that I could and maybe even did, before they were translated into German from either English or whatÃ¢â‚¬â„¢s called “Amerikanisch.” Sometimes a volume IÃ¢â‚¬â„¢ve passed up becomes suddenly attractive, as if Nicholson BakerÃ¢â‚¬â„¢s Wie gross sind die Gedanken? might be more compelling than his The Size of Thoughts. And however did Sebastian FaulksÃ¢â‚¬â„¢ World War One novel, Birdsong, get to be called Gesang vom grossen Feuer, son of the great fire? ThatÃ¢â‚¬â„¢s a book I know well, but seeing it in translation gives me a flicker of uncertainy: is it still the same story? The new title makes it seem as seductively labile as the dame in 40s noir, the one the detective is no longer sure he recognizes. Though thatÃ¢â‚¬â„¢s nothing compared to the attractions of the German books themselves, and sometimes itÃ¢â‚¬â„¢s simply too much.

So I buy something, a volume of E.T.A. Hoffmann or Theodor Storm, and look around for somebody to give it to. I struggle my way through a dustjacket, and hope that back home IÃ¢â‚¬â„¢ll be able to find a translation of Adalbert Stifter. And yet I know that my sense of these writers will remain at best an approximation, while the real thing is kept behind closed doors. At times even literally closed, in the glass-fronted cases they use here for scholarly editions of the classics. Still, IÃ¢â‚¬â„¢m somehow happy that the book in those cases IÃ¢â‚¬â„¢d most like to read — the five volumes of the Wanderungen durch die Mark Brandenburg — has never had an edition in English. So long as I havenÃ¢â‚¬â„¢t gone through Theodor FontaneÃ¢â‚¬â„¢s account of his late 19th century wanderings in the countryside around Berlin, it can remain the object of a Proustian longing, forever out of reach and therefore incapable of disappointing me.