While focusing on things other than blogging this month, IÃ¢â‚¬â„¢ve been running a series on independent bookstores. Below Mark Snyder praises NYC’s Drama Book Shop, ground zero for playwrights and all manner of performing arts hopefuls. 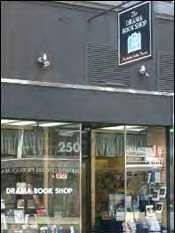 We Who Love Books are spoiled in New York with its abundant (though always shrinking) number of quirky used bookstands and savvy independents standing tall beside the B&N monoliths, but the one space I will never take for granted has been a shrine for countless writers, actors, directors, and assorted theater folk for many years.

We always remember our first pilgrimage to the Drama Book Shop.

You’ll have to trudge through construction to its location on West 40th Street between Broadway and Eighth Avenue, where the two-story space houses the largest collection of theater-related books and such in the United States. If I find myself desperate to read that obscure William Inge play Kim Stanley did in the late 1960s (which I only discovered while reading the Stanley biography I also found here), it will be sitting on a shelf. If a friend is auditioning for a new production of Neil SimonÃ¢â‚¬â„¢s Ã¢â‚¬Å“The Odd Couple,” he will find what he needs here. The DBS is not snobby when it comes to inventory – the store aims to be the spine of its reading community.

The shop itself is long and narrow, well-lit and organized. A table across from the checkout area displays new releases and new anthologies of plays by up-and-coming writers. There are tall wooden shelves along the sides with an old-fashioned sliding ladder to reach overstock above our heads. These shelves are devoted to books on acting, on directing, and to guides on how to examine plays critically and place them in a larger social context. Additional free-standing shelves house books on costume and set design. They’re full of beautiful images and solutions to the most-specific design challenges as well as sketches from the masters of the form: Boris Aronson, Eugene Lee, Florence Klotz, et al.

Directly across from all of this is an entire wall devoted to non-book items like DVDs of famous (and infamous) performances of plays, dialect and voice tapes, and a wide assortment of BÃ¢â‚¬â„¢way knick-knacks and sheet music from the shows of yesteryear. After paging through a large book of Carol Channing/Ethel Merman paper dolls, I felt practically inducted into the Theater Hall of Fame.

The back half of the space houses the vast script collection that is the staple of this store and provides an opportunity for community and chance meetings. Armed with a copy of that Inge play (Ã¢â‚¬Å“Natural AffectionsÃ¢â‚¬Â), I might plop down on one of the cheap couches next to an actress on her lunch break trying to gather material for an improv class sheÃ¢â‚¬â„¢s taking at night. Seated on a chair nearby, immersed in a Dramatist play script (how do they decide which color cover each play published will get?), may be a former Tony winner, deciding on a play to direct at a small theater downtown. It is that kind of town, this kind of store.

The plays themselves, shelved according to author, include international translations and Greek/Roman classics, alongside a vast shelving unit for ShakespeareÃ¢â‚¬â„¢s canon. If I want an adaptation of IbsenÃ¢â‚¬â„¢s Ã¢â‚¬Å“Hedda GablerÃ¢â‚¬Â theyÃ¢â‚¬â„¢ve got five for me to choose from.

The DBS staffers are overqualified in their knowledge but always approachable. They show no hostility toward those relentless inquiries about the latest Ã¢â‚¬Å“hotÃ¢â‚¬Â play that every regional theater is doing this season or the Ã¢â‚¬Å“hot new writerÃ¢â‚¬Â making waves with multiple productions in the city at once, or toward the visitor from a town in the Midwest, whose community theater has mounted a summer production of Ã¢â‚¬Å“VanitiesÃ¢â‚¬Â for the fourth time, and whoÃ¢â‚¬â„¢s heard about this magic shop, this haven for All That Is Theat-ah! The customer came all this way for literature – and might as well get the complete experience: Ã¢â‚¬Å“Do you have anything by Christopher Durang?Ã¢â‚¬Â The staffer will nod and smile, moving for the umpteenth time to his computer to check inventory. (Of course, if the DBS does not have something in stock, the store can place an order and have it back within the week.)

Behind the customer service counter, there is a small wooden staircase leading to the loft-like second level. Upstairs, there is more seating overlooking the rest of the store. Here, Marni Nixon or Donna McKechnie might be signing (or singing) her autobiography, or an iconic playwright like Lanford Wilson could be featured on a panel discussing what it meant to be a young writer working at CafÃƒÂ© Cino in the Village. There are books about writing up here, as well as the musical theater and how to audition. They hide these, I think, to discourage awareness of the reality of this business, the difficulty of accomplishment, and the vast numbers of plays being written for the same new play slot each season. The DBS is not in the business of shattering dreams; it provides the tools for the theater artist to chase after his or her particular vision of happiness.

IÃ¢â‚¬â„¢ve been coming to this shop since before it moved to this elegant space, when it was on the fifth floor of an office building next to a strip club on Seventh Avenue across Time Square. My first visit, I was a teenager visiting the actual shop I had been stalking with phone calls over the years, requesting plays unavailable to me in Ohio.

I left that first day with plenty to read on the Greyhound bus ride home, the books wrapped in a brown paper bag, the essence of their origins (the theater) still somehow lingering on them.