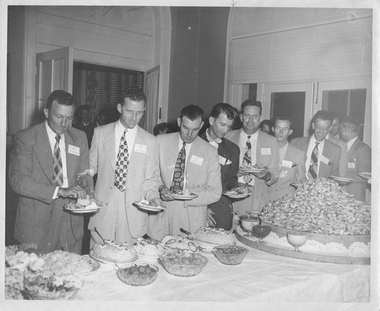 In this photo, my other granddad, my dad’s father, stands just to the left of the shrimp mountain, sporting a bow tie and natty ’50s ‘do. The undated shot was taken at a Junior Chamber of Commerce Convention at Biloxi, Mississippi’s Buena Vista Hotel, which no longer exists. (Much larger version here.)

Nowadays, at 89, Grandpa’s got a full head of white hair and the strength and carriage of a man half his age, but his mind is failing. He doesn’t remember breaking his hip, forgets that my grandmother and his parents have died.

He spends his waking hours plotting escape from the assisted living facility where he lives not far from my aunt and uncle, in Nashville. He wants to go home, but he can’t say where home is.

Recently he got out a side door. After leaving the grounds, crossing some busy streets, and traversing a ditch — all with a walker — he ended up roaming through a bank parking lot, where someone recognized him.

Soon some aides pulled up in their car. “Mr. Newton,” they said. “Would you like a ride?”

He allowed himself to be helped into the car, watched peaceably as they collapsed his walker and stowed it away. But when they pulled up in front of the facility, he banged his fist against the door.